And now, the end is near…

… and so we face, the final sta-age… – doesn’t quite work I know, but it’s a work in progress ok!

So, Stage 10 completed today. As you may have seen on my brief Facebook post, the cloud hadn’t lifted by the time we departed this morning. Visibility was pants. So pants in fact that we were a right miserable pair of so & sos & just couldn’t get motivated to leave at all. Tonight’s refuge is another remote one, with only very restricted access, so we are carrying all supplies in our rucksacks. The prospect of that was daunting too, not knowing what weather to expect.

We were ascending pretty much from the off today, out of Tré-Le-Champ all the way up to the monolithic rock of Aiguillette d’Argentière. I’m sure the scenery was wonderful as we climbed – the guide book certainly said it would be – but we could see nothing. Nada. Even the rock – which was massive & towered in front of us – was just a muted shape in the cloud. What was a bit more concerning was the fact that the vertical ladders bolted to the sheer rock face before us were also similarly hard to see – with the top not visible at all!

There were about 240m of ladders & handrails fixed to the rocks, broken up in to decent chunks so that we could rest as we climbed. Again, I’m sure the scenery was fantastic… but I guess it was helpful to not be able to see it, just in case vertigo set in mid climb! We obviously couldn’t use our walking poles for this stage as we needed to hold on to the ladders, very tightly, so the climbing parts in between were really hard work as they were very steep, climbing up rocks that were knee high, which really took it’s toll on the thigh muscles. Mine were BURNING! Serious leg wobble happened more than once, & I’ve not had that since I met Polly! (#browniepoint)

So by the time we reached the top of the ladders we were at 2132m, & knackered. So we had an early lunch, from the bits & bobs accumulated in our packs. Mine consisted of 2 pieces of dry 2 day old bread, 4 slices of cheese of the same age, a baby food fruit purée & half of Mike’s Mars bar (other chocolate brands available). There was quite a strong wind coming over the top, but at least visibility was improving & we got to see some of what we had missed on the way up. We were drenched in sweat, so the wind chilled us quickly, so extra layers were applied. This was a difficult one for the day actually, as until now we’d been in shorts & t-shirts. But as the weather was now changing, one minute it was cold, the next warm, one minute you were sweating profusely, the next you were stationary & cooling down so quickly you were freezing cold. All this with a large rucksack that wasn’t the most convenient thing to remove/put back on!

I also had to endure lots of things from my dislike list today – with it being Sunday, there have been LOADS of loud speaking French people, in groups, overtaking me & coming downhill towards me. Sometimes all at the same time! I was very close to shushing a number of them, more than once. Polly wouldn’t have stood for it – they’d have been shushed very early on. On the plus side, I didn’t get penned in by anyone with bad wind today – which could have been nasty on the ladders.

Did I tell you why that was on my dislikes list by the way? I don’t think I did – allow me to share.

So I was ascending, I can’t remember on which day it was. Possibly the day of ‘the list’. In front of me were this couple, holding hands, chatting as they climbed. I was obviously irked from the start – chatting & climbing, unnecessary. Unfortunately they were going just a little too fast for me to be able to get by, plus they were wide (as there were two of them, not a weight thing) which would have made it difficult. I wasn’t irked by the hand holding, before you say anything – what do think I am, some sort of misery?!

Anyway, so there I was. Stuck behind them, quite close. Then, suddenly, he decides to break wind. Still holding hands – like it’s the most romantic thing in the world! Then, he follows through (not in that way) with about another half a dozen. And it’s not like they were small ones – oh no, these where the beef tomatoes of wind breaking. And I was trapped. Totally trapped. I could do nothing but await the slipstream. And then it came. We were going fairly steeply up, so there was no way I could hold my breath. So I just had to partake – totally against my will. It was HORRIBLE. And the after-taste lasted for what felt like hours – in fact, I can taste it again now as I’m reliving the moment ????

Anyway. I’m glad that’s out of my system. I think he was too. I managed to get by them a little later. They’d stopped holding hands. I should think so too.

The last part of today’s climb was to our refuge – 220m more of knee high boulders, ever moving rocks underfoot, more ladders, & a plethora of happy people coming down! But, so worth it – the views from here are just spectacular. Huge glacial lakes, huge rugged mountainsides, misted but seemingly endless views in to the distance of both towns in the valleys & snow covered mountains either side. But there, right in the middle, dwarfing all in its midst, right in front of us, is the massive Mont Blanc.

In & out of the clouds which were still blowing through the valley, it’s snow topped summit glistened in the sun, seemingly close enough to touch. I put the zoom lens on my camera to get some detail & it seemed too close, with the summit already close enough without it! I’ve taken sooo many pictures of it – hopefully I’ll have some good enough to patch together when I get home & create one, huge, close up image of the entire mass. I know a bloke that prints on canvas, so I just need to find a big wall!

So after all the excitement of the views up here, the 5 people dorm was something of an anticlimax. But the food is great. As we reached the refuge early, we treated ourselves to a cheese omelette each & a large piece of home made berry pie – both amazing. A two hour nap followed by really bad indigestion proved that not to be the best decision of the day!

No wifi this evening as the refuge is so remote, but I’ve managed to get this written before dinner, so will post tomorrow when we get to our final destination – Les Houches! Back where we started!

That start in Les Houches seems a lifetime ago. Hard to believe it was only just over a week ago. We’re certainly fitter now than we were then!

Tomorrow, Stage 11, won’t be letting us off lightly though. 20km, ascending 800m to a final height of 2526m, before the knee crushing, relentless, descent of 2080m in to Les Houches. Now that will be a time of SERIOUS knee wobble!

And so to bed. It’s only 8.30pm here (7.30pm with you), but after all the food we’ve eaten today & the hard day ahead tomorrow we’re turning in early. Just taken some beautiful shots of the peaks with the sun setting on them, so will add them to this post below. We’ll be away from here by 8am latest, so according to the guide should be finished around 4.30pm. Once there we’ll get the bus to Chamonix, where we can just be tourists for 2 nights until we head back on Wednesday! 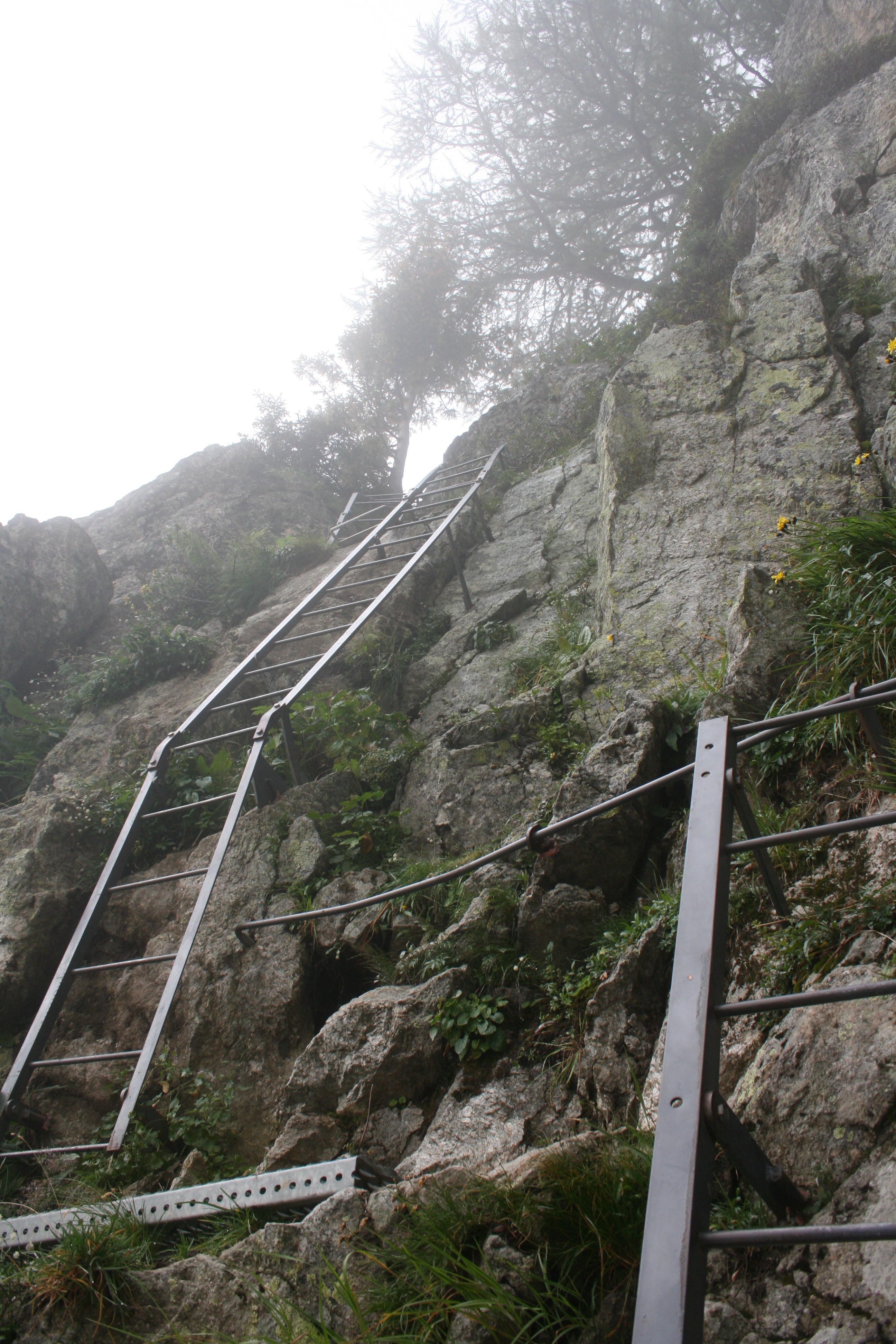 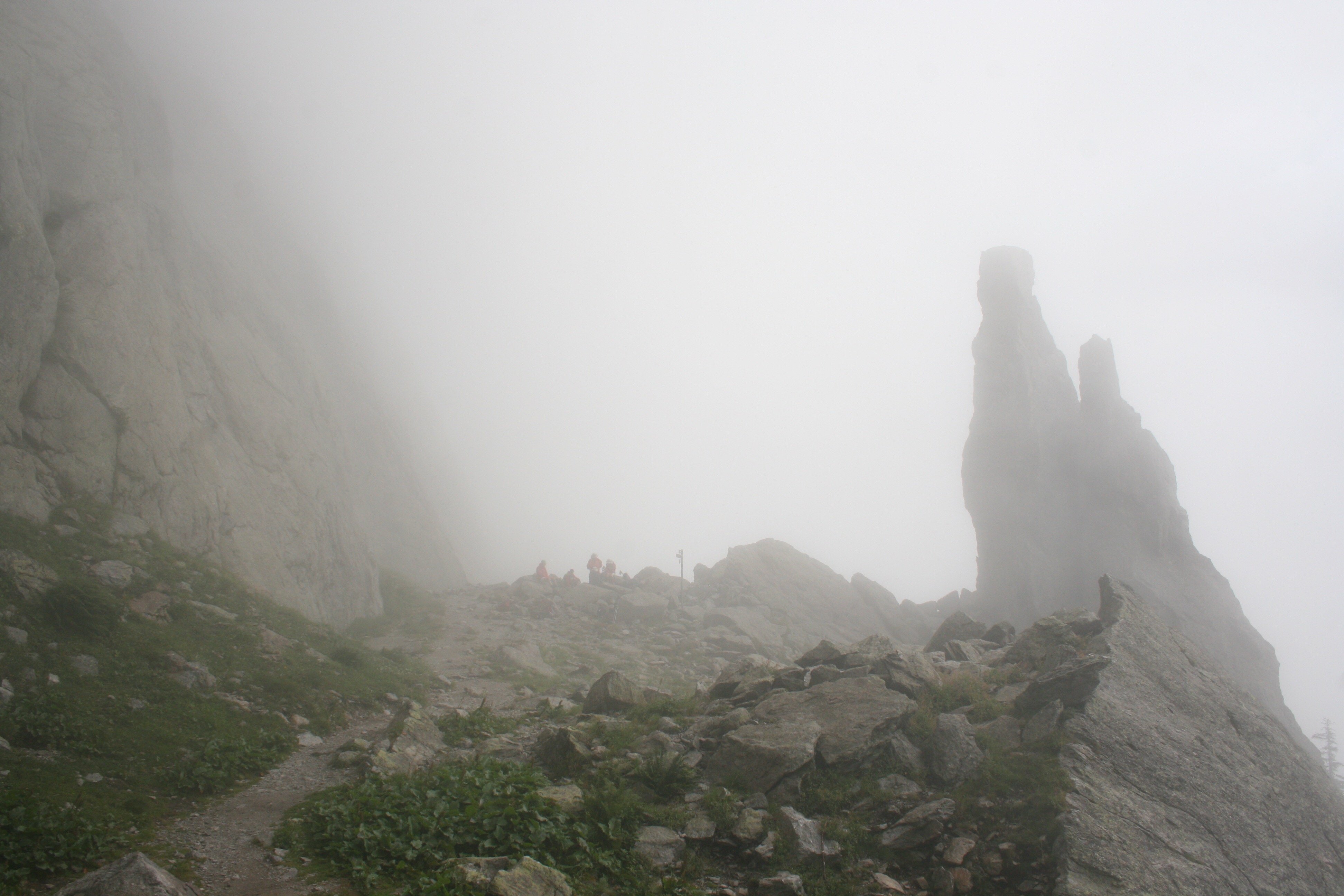 Tonight’s refuge – first sighting. We had to climb up to it! 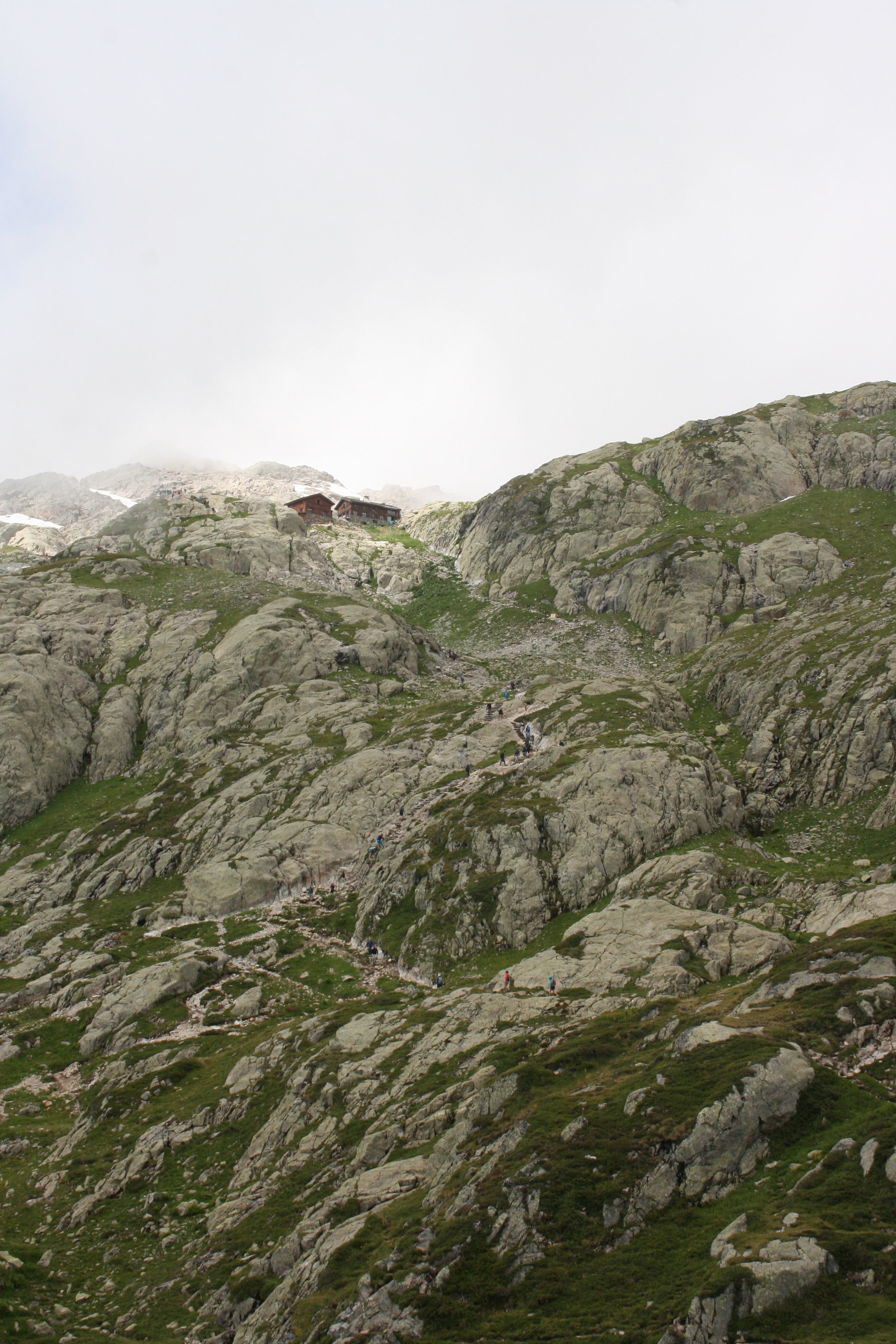 And that there is Mont Blanc. This was out view from the refuge… how blessed were we?!!! 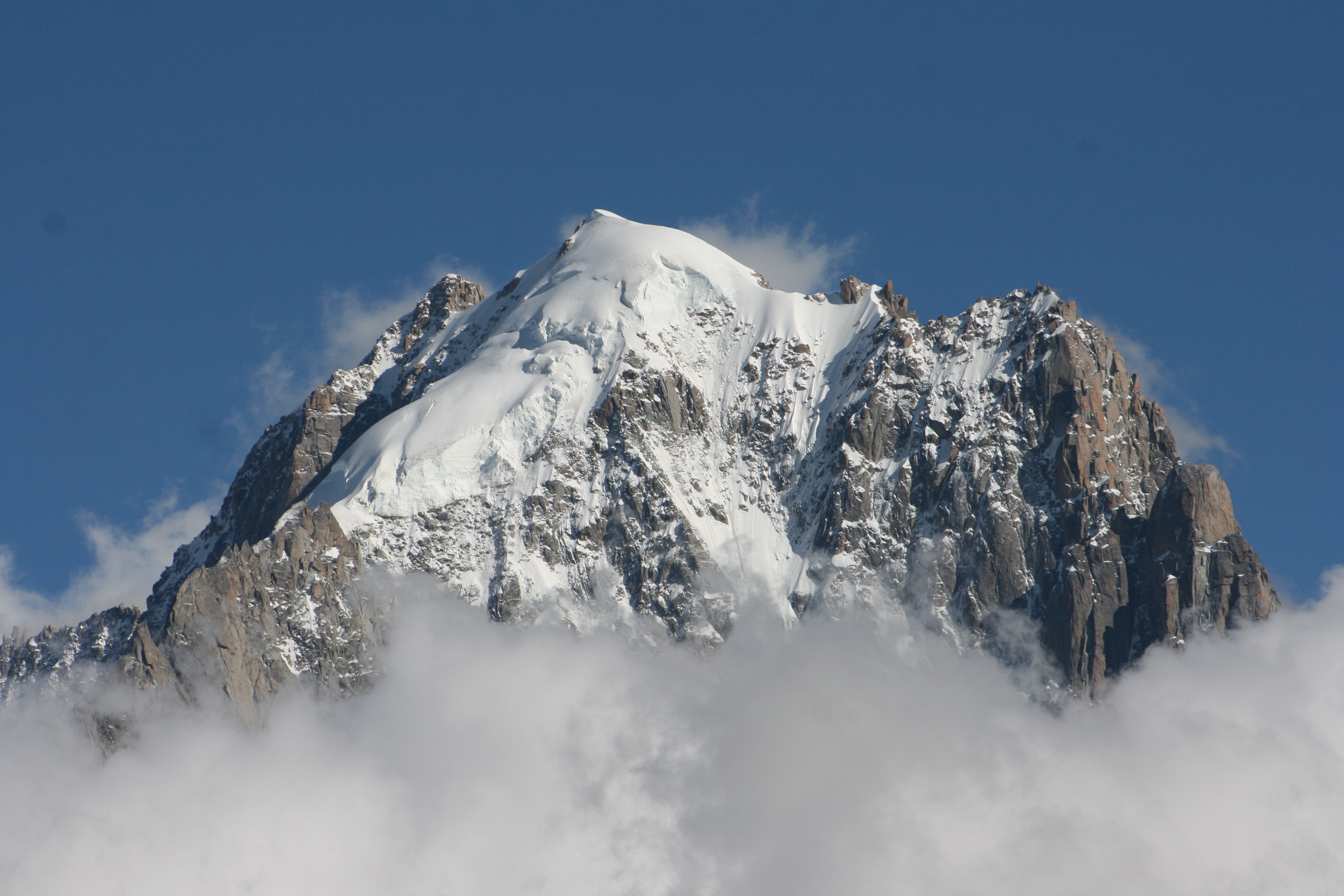