But, back to the start of the day. As usual, we were up at the the dawn of crack, knowing that ahead lay a daunting 20km journey back to the start- Les Houches (you may recall, pronounced ‘Lezoochez’). We actually had no choice about being away early, because the refuge had told us that once we came for breakfast at 7am we wouldn’t be allowed back to the dorms. So everything had to be packed away in our backpacks pre-breakfast.

As the breakfast was pretty rubbish by previous standards, we were ready for the off by 8.30am. And so it began. The endless down down down…

With a full backpack & knee high boulders to negotiate, hour upon hour of jolting, knee wrenching, thigh pounding, bone shaking downs was not better than climbing upwards. It was just seemingly endless. By the time we reached Plan Praz at 2000m (at about 10.15am) the prospect of changing to an equally muscle wrenching upward ascent of some 526m to Le Brévant was too much to comprehend. So you know what? We cheated!

Well, look, before some of you get all hoity about this, we’re a couple of right old geezers. We hadn’t had the best run of things with either preparation nor navigational prowess. This was the last day, the home run if you will, we’d worked blummin’ hard & – quite frankly – felt we deserved it. Now obviously, if anyone would like a refund because we cheated a little bit then I’m happy to arrange that. But I think it was actually less of a cheat & more of a, well, improvisation. We caught the chair lift up to Le Brévant… ????

But it saved us over 2 hours of hell! Surely you wouldn’t begrudge us that?!

And when we got there we had the biggest, fattest, cheese loaded panini you have ever seen in your entire life! But boy did it taste good – & made up for the rubbish breakfast we’d had. After we’d manged, then started the big cahoona of downward climbs. If we’d thought the morning was hard on the knees, this was going to be a whole new ball game.

But you know what? I’d hit that sort of hysterical laughter stage where I knew the end was in sight, where I knew that within hours the pain would be over. And I actually manifested into one of my own dislikes!

As I was going down that final 4 hour descent there wasn’t anyone not getting a bonjour! I bonjoured the ass out of that downward climb – I was the happiest guy on that mountain today!

After a descent that really did feel like it went on forever, finally, we emerged from the woodlands via a small side path & I recognised where we had come down the same road just 9 days earlier to start the journey. That was it! We’d done it!

We did a jump & a dance & a hug & we shook hands in a very British way (pic below) & made our way in to Les Houches to catch a bus to Chamonix. Which is where we are now.

The buzz of this place is great. We’re right in the centre, so within easy walking distance to everything that’s going on. This evening we’ve had a very French pizza & half a litre of wine each. So are feeling nicely squiffy. Mike has inserted ear plugs & applied blackout shades while I (the dedicated one of the pair) am completing the blog. I’ve also had a lovely chat to my lovely Polly. Can’t wait to see her & my boys & my girls on Wednesday.

Tomorrow, Mike & I are taking the cable car journey up to the summit (well, nearly) of Mont Blanc, to get up close & personal to the bits we didn’t manage to reach on the TMB. Another early start – 7.10am our time (6.10am yours) – before the crowds arrive, as tomorrow is set to be a glorious day.

But a day without walking boots already sounds like a glorious day to me!!!

And so again to bed – but this time it’s a proper bed. In a proper room. It even has a fridge! There’ll be no sounds, like that of a brass band tuning. There’ll be no steady increase in room temperature as everyone starts to sweat as the night progresses. There’ll be no rancid smell of body odour permeating every fabric of your things, as they ‘soak’ in the air of the room all night. And there’ll be the knowledge that upon awaking in the morning there’ll be no week old socks & pants to climb in to, & most importantly no more crippling ups! Praise The Lord!

So I’ll leave you with some other pictures from today – nice & clear now that the cloud storms have passed. And will hopefully have some crackers from Mont Blanc itself tomorrow.

Mont Blanc, caught by the sunrise this morning:

One of the many breathtakingly beautiful glacial lakes we passed as we climbed. 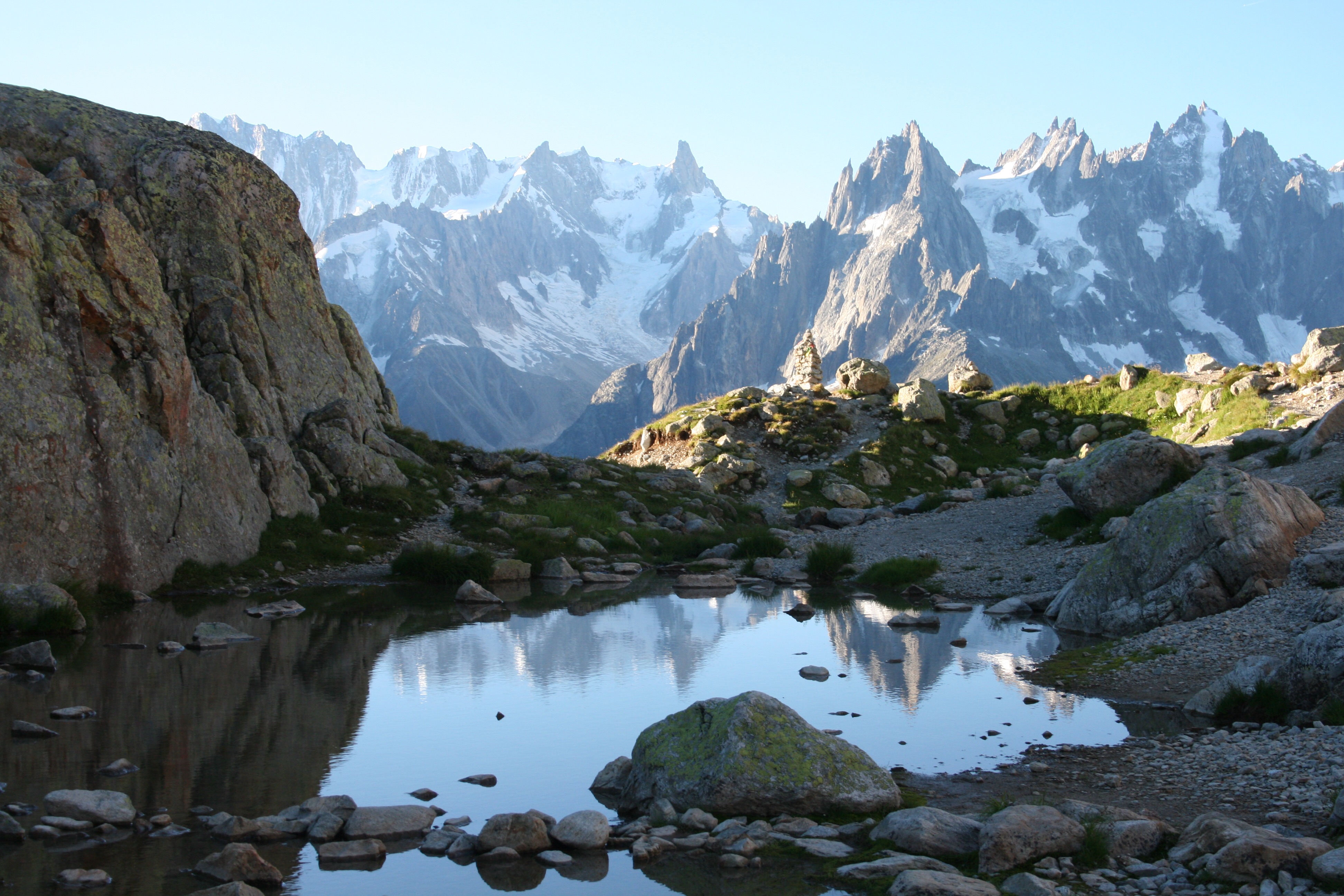 First sight of Chamonix, though hours & hours away yet at this point!