A Different Kind of Day…

Well, when I was applying my P20 this morning, I didn’t see the day panning out quite the way it did…! Some of you may have seen the little video I posted on Facebook earlier, but the day just went from strange to stranger to mad.

After a fairly uneventful evening – apart from the moment when one of the kids on a scool party sat on a glass topped coffee table while I was writing by blog in the lounge room & fell through it with a very loud crash, causing me to pull in very strong personal self discipline by not laughing & just look disapprovingly over the top of my glasses – we slept well & arose for brekkie at 7am. Having said that, I didn’t exactly rise naturally as I had slept very well & Mike’s first attempts to gently wake me hadn’t worked. So after the third, or so, very hard shove, I then arose for brekkie.

I have spoken to Mike about his bedside manner & he has assured me he will work on it.

We left at 8.45am – new boots in place – weather fine, shorts & t-shirt, cheese & bread in rucksack (thanks to some cheeky breakfast snaffling), all good. Shortly after, we started our ascent – the first of two for the day – which we already knew would be a bit testing. The first part of the ascent was on open mountainside, but it soon entered forest with a fairly good overhead density of branches. It started to rain. Which was fine as the branches were covering us sufficiently, and actually it was quite nice as the climb was strenuous & the rain served to keep us cool. Then it started raining some more & it started to break through the trees. So – quite excited at the prospect – time to break out the Tiger poncho.

Not a poncho that made me look like a tiger you understand – that would be silly – but a poncho purchased from Tiger in Highcross before departure.

Then we came out of the forsest & boy did things take a turn! All of a sudden it went from being a nice gentle bit of rain to a pretty much full on storm! Wind… rain… more wind… more rain… and still with nearly 1000m still to climb! I just put my head down & went for it. I have no idea where the energy came from to do it, but I just threw myself at that trail to get it done. With each turn in the path, another stretched out before me – again & again & again. Finally I looked up & saw the Refuge Du Col Balme high above me – which is where we were striving to get to at 2191m – but as I looked at it, the clouds were coming in & it disappeared from view.

I kept going, pushing & pushing myself , fighting against the steep incline, willing it to be over, but still each turn just presented yet more pathway ahead. Finally I reached a sign saying the Refuge was 30 minutes walk away – well, I saw this as a challenge, not advice. I found reserves from somewhere & before I knew it – drenched, hands numb, exhausted – I reached the Refuge. I checked my watch – I’d done it in 20 minutes. I was sooo thankful.

The next blow was to find the Refuge wasn’t allowing anyone in unless they were just buying food – certainly no changing. As I’d whizzed on ahead from Mike I couldn’t go inside anyway as he’d have no way of knowing I was in there. Then I spotted an information board, with a small pitched wooden roof above it – I quickly made my way over to it before anyone else spotted it. I took off my poncho & spread it on the ground, then took my rucksack off & sat it on it. I was shivering & I couldn’t stop my teeth rattling, nor could I feel my hands, but I knew I needed to get some dry layers on quickly. So I stripped off – right there next to the information board – down to my pants & socks.

I got my spare base layer out of my rucksack, along with my waterproof jacket & trousers, & quickly put them on whilst hopping around on my poncho trying to stop my socks getting wet. Finally everything was in place & I tried to lace my boots back up, but my fingers were too numb so I left them undone for the moment. My wet clothes I packed away in the side pockets of my rucksack. I had no spare trousers to replace my drenched shorts, so my waterproof trousers were all I had for my bottom half – & they had a big hole in them I found out, which certainly helped dry my drenched pants underneath! It also enabled me to put my hand inside & draw some warmth from my legs to try & give me some feeling back – the hand on the other side I put in the trouser pocket. After about 10 minutes some feeling started coming back to my hands.

I rummaged in my rucksack & found my fingerless gloves & tried to put them on. But my hands were still so wet that I couldn’t get them on. I got them out anyway & resumed trying to warm/dry my hands. All the time my eyes were on the brow of the hill, watching for Mike to appear so that we could go inside the Refuge to dry/warm ourselves & get something warm to eat/drink.

I must have stood there for 45 minutes, but eventually Mike appeared. I was so relieved. Mike, being a hardened trekker, was in his element & loving every minute of it – in spite of being cold, wet, having no feeling in his hands & being exposed to it for over two & a half hours! We went inside the Refuge at last. It was lovely & warm & rustic & we wanted to stay there forever.

We ordered some bouillon – not soup, as we were corrected quite forcefully – which was delicious & very warming, & some cheese, ham & bread. We then sat there in a trance for what must have been a good hour, getting ourselves ready for ‘going back out there’. However, when the time came it seemed that the weather had passed. So we checked our layers & headed off again.

However, it wasn’t long before the weather came in again. In fact I had stopped to take a photo of the wonderfully pretty cloud formation travelling up the valley in front of us. Then I realised it was heading directly towards us… and there was NOTHING we could do about it. It got nearer, & nearer, & nearer… then bang! It was on us!

We could barely see our hands in front of our faces – Mike was just a dark outline. Everywhere was white, the wind was hammering down & the wind was battering us sideways. We lost all bearings from our surroundings as everything just disappeared into the whiteness. All we had to go on was our map & compass. In fact, the map came out so many times Mike has been renamed ‘Myrtle the map’. He is so good at it that I feel sure we will be consulting it from now on for everything, including finding the cereals at breakfast.

Our ongoing journey took us to the ridge walk of Aiguillette des Posettes at 2201m – which is the video I posted earlier on Facebook – & believe me, with total whiteout, seriously strong winds buffering in, & drops of 1000m+ either side of the ridge I was SERIOUSLY outside my comfort zone! Talk about adrenaline pumping through my veins!

But hey, guess what? We made it! We hunkered in behind a rock mid way for a quick Twix & pack of pulped fruit, but we made it!

Once off the ridge we descended at quite a fast pace in to woodland, at which point the clouds were left behind & visibility returned to normal. The rain carried on, but as we had our waterproofs on still we didn’t care!

Once down we breathed a sigh of releif – but decided that actually, we’d really enjoyed it & it had in actual fact been one of our favourite days so far! Haha! Boys eh?!!

The biggest shame was that today should have given us spectacular views of “the entire Mont Blanc Massif, the Chamonix Valley, the summit of Mont Blanc, the Aiguilles, the Mer de Glacé and the Argentiere glaciers”. Instead we just saw white. Which is such a shame. But Mike & I have a cunning plan for resolving this… I just need to clear it with Polly first!

We’re safe though, that’s the main thing. And relieved to be in our nice warm Refuge – in Tré-Le-Champ, in France! We’ve nearly made it round the whole blummin’ thing!

Nice place. Very quaint. We’re sharing a dorm with lots of other people – the beds are all built on different levels, hard to describe, but very interesting. As we got in a bit later than we’d have liked we didn’t get first dibs on beads, but we’re OK. Our room sleeps 8 & every bed is occupied. Ear plugs going in tonight!

Tomorrow is a short day for both distance & height, at just 4kms & 976m ascent – but if I were to tell you that of the 976m we’re ascending, two thirds of that is on ladders fixed vertically up sheer rock faces which we will have to climb! Doesn’t seem quite so restful does it?!

Add to that the fact that we’ll be carrying full packs again as the refuge we’ll be staying in tomorrow evening is too remote for the bag transport to get to it – Lac Blanc, at 2352m. Lac Blanc boasts one of the finest of all the Alpine views to the distant Aiguilles Verte and Charmoz, with the glacial highway of the Mer de Glacé between them, and the Grandes Jorasses dominating the backing wall – let’s just hope the weather has cleared!

And so again to bed. That’s if I can find it. Where’s ‘Myrtle the map’ when I need him…

The day started clear enough (our Refuge was next to the little pink building in the centre): 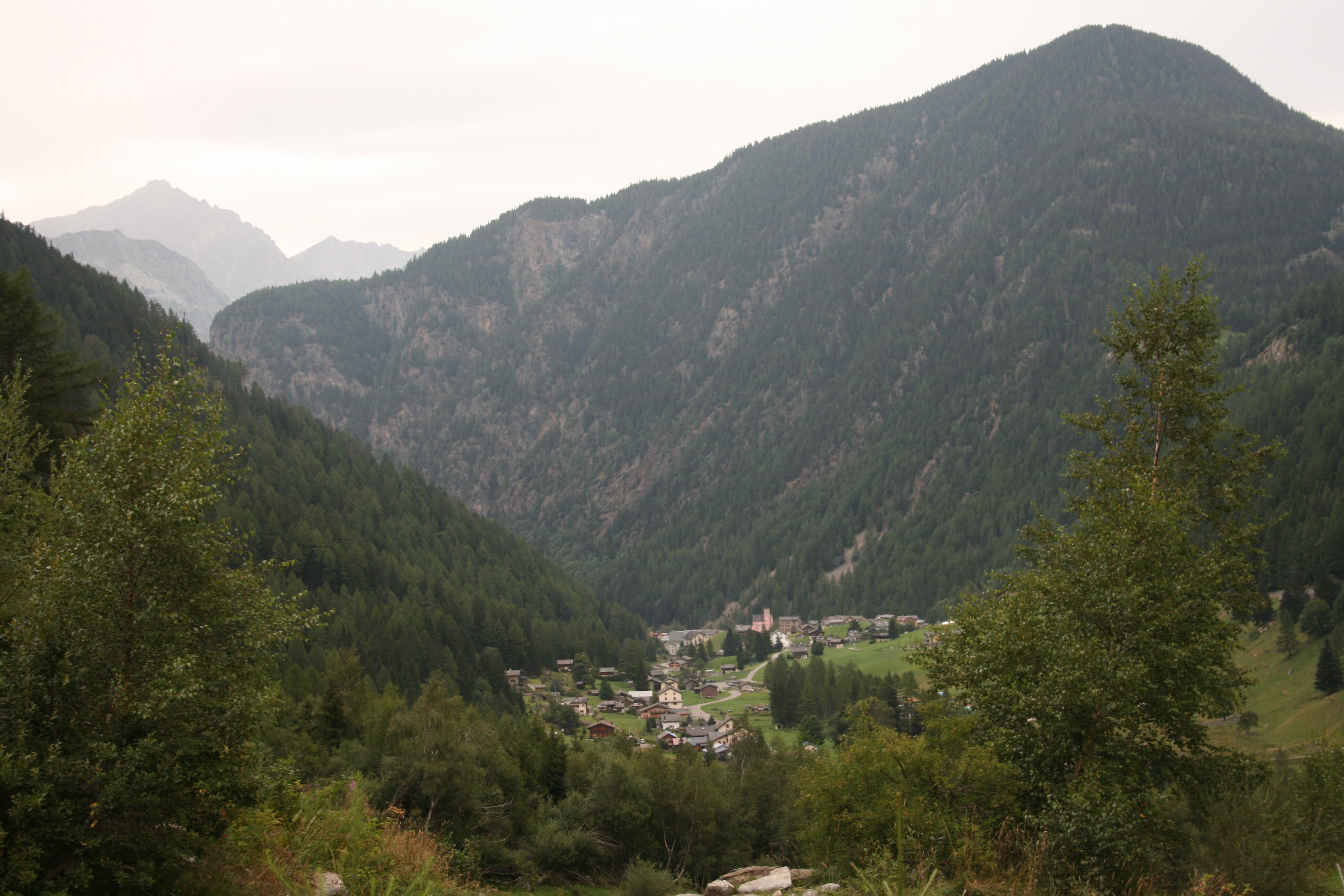 Then the clouds started to come in…: 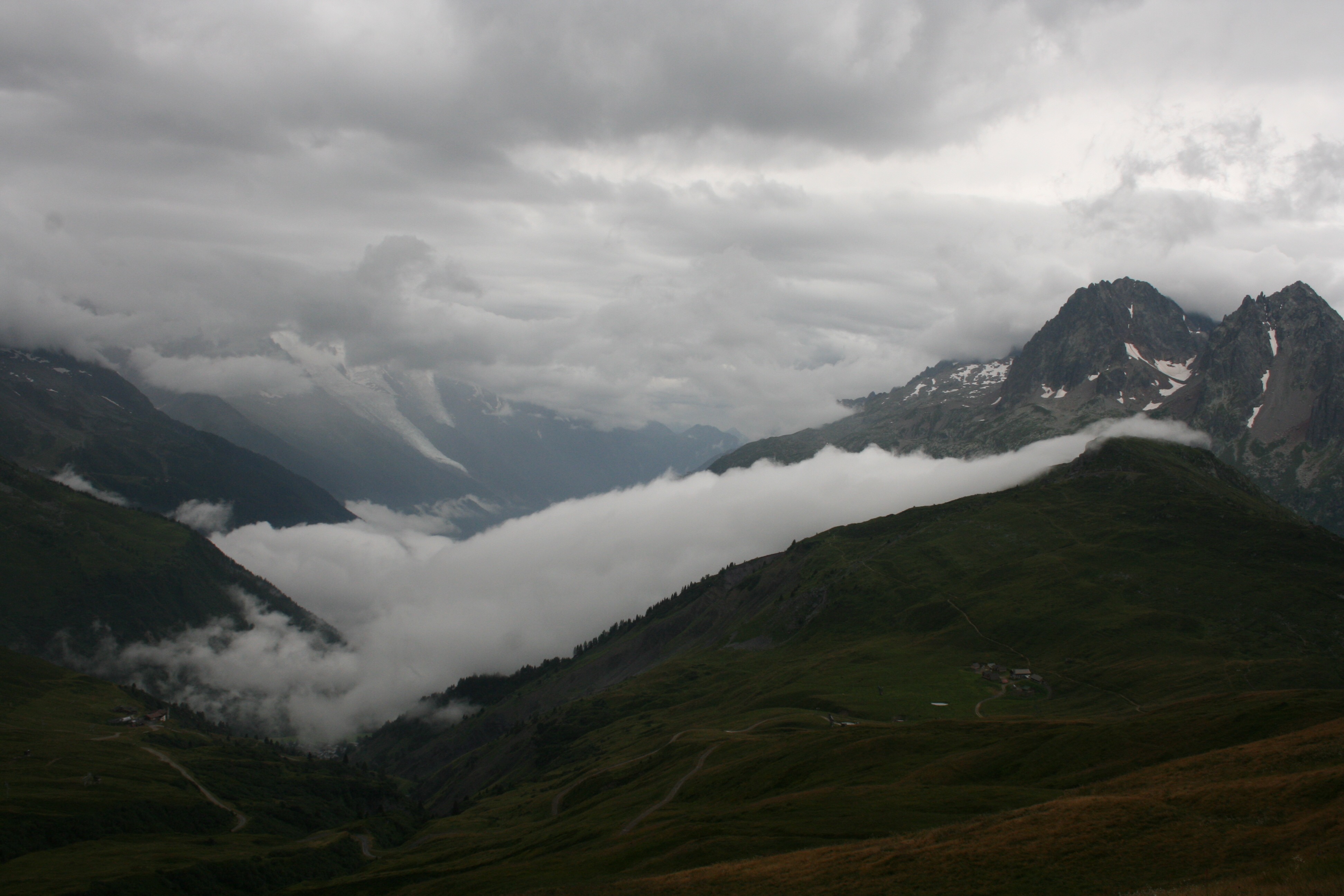 And then they were upon us!: 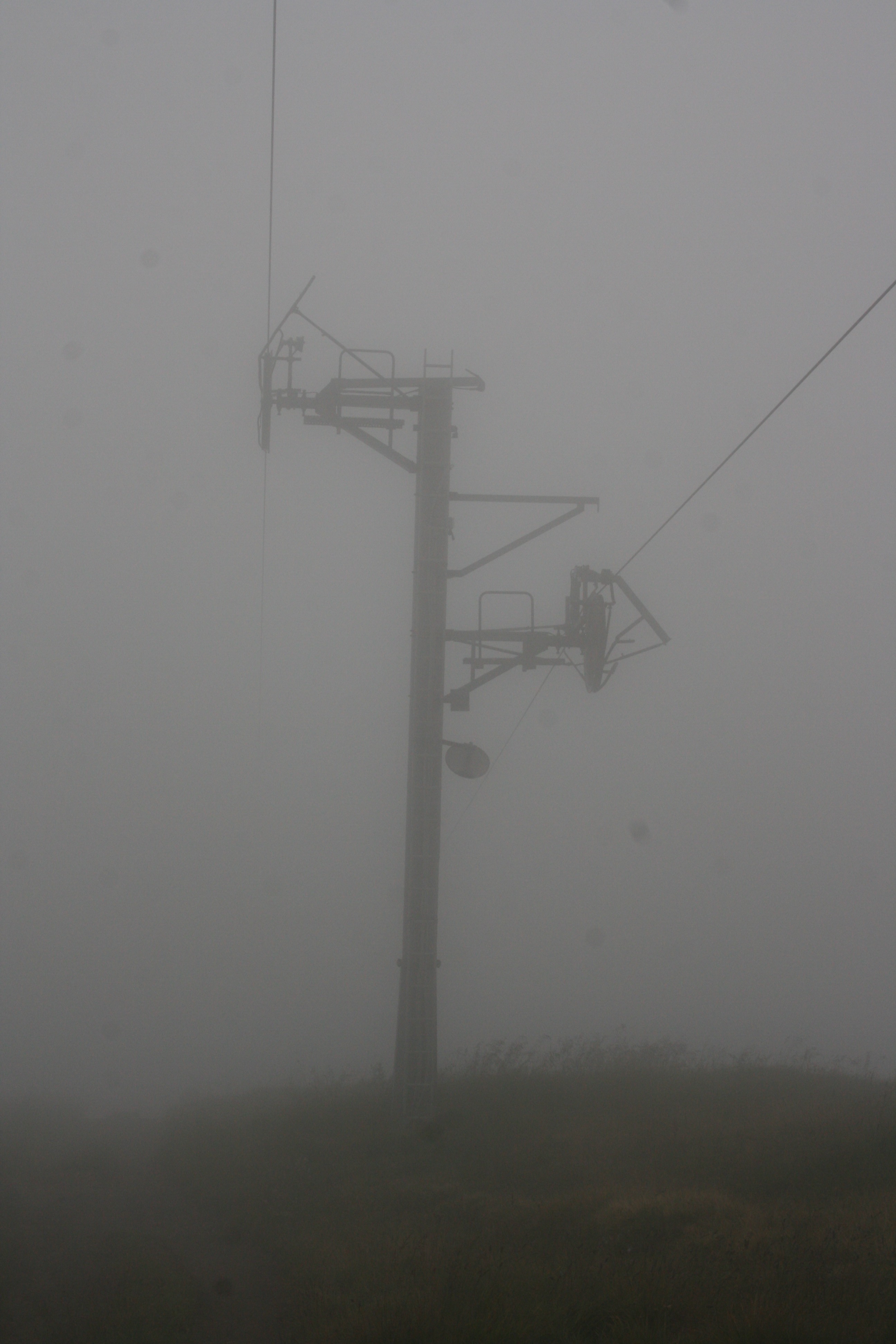 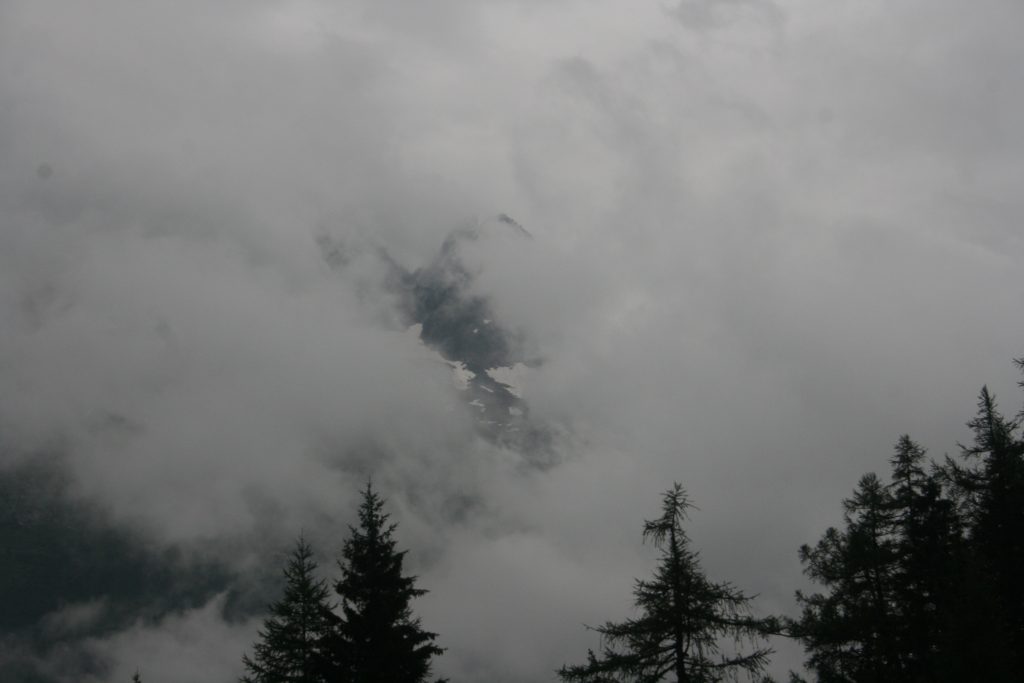