Today another long bus journey… 6 hours, our destination Puno on the shores of Lake Titicaca. On the way we again had to pass the highest point in Colca Canyon at 4910m. This time we stopped to take some pictures – I got some great panoramics but I’m guessing they won’t translate too well on the blog. I’ll try one though – see what you think. The views were amazing – & whadya know, a ‘field’ of prayer stones just like the ones we saw as we walked through the Himalayas to Base Camp. This pic is for you Rob 🙂 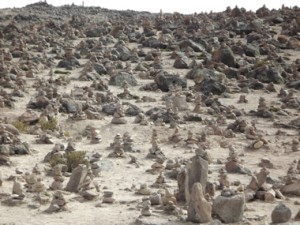 Puno is the last city in Peru – the next stop is Bolivia. About 60% of Lake Titicaca sits within the Peruvian border, the remainder within the Bolivian. Of course there is no actual line dividing the two, nor any border control, meaning that the border is very ‘loose’ & there is seemingly no control over what comes across the Lake – making it a black market highway!

The town just before Puno is called Juliaca. Much cheapness in Juliaca! You can get just about anything there – real or fake, but mostly fake – even the alcohol. As we drove through it it looked like a real den of iniquity & I was glad not to be stopping off there!

Much contraband travels across from Bolivia & as cost of living in Bolivia a lot lower than Peru the black market is thriving. Very little tax is paid in the towns & cities close to the border – for example, petrol in Peru is about $5, compared to Bolivia where it’s only $2. On the black market the price is $3.

Something else we’ve noticed – & not just here in Puno – there are unfinished buildings everywhere. This is because as the law stands here in Peru, until a building is finished there is no tax to pay. So what people do here is apply to build a 2 storey house, but only complete the ground floor. The upper floor is left with the support girders etc. sticking out & loose bricks all around. Then the family moves in & just lives on the ground floor! To change this law would could a revolution by the Peruvian people, so the law just stays as it is!

Arriving in Puno, the view across the lake from the top of the road we drove in on was again breathtaking. The lake is vast – & all we could see from our vantage point was the port! 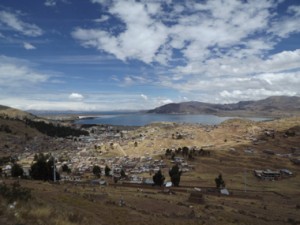 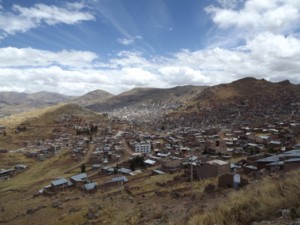 After dumping our bags in the rooms we headed out for some lunch. I had ‘King fish’, which I’ve neither heard of nor eaten before. It was delicious – & hot, a bit of a rarity we’ve found! After lunch we headed back off in to the main town centre to have a nose around the market (it’s Saturday, so a big market day) – which started off rather unpleasantly as while we were in the restaurant the heavens decided to open… & I mean OPEN! It absolutely chucked it down. The town is built in a valley, so as the rain fell street after street became rivers… it wasn’t welcomed at all! None of us had bought sufficient clothes to get wet – & there were certainly no facilities to get them dry.

As we ducked in & out of the small plastic sheets covering the market stalls, it eventually subsided & the sun came out again. At the market we bought rice, cooking oil & fruit as gifts for our hosts tomorrow evening – the market stalls are really tightly packed together & every stall seems to be selling exactly the same thing, so it was really hard to choose which one to buy from. In the end we decided as a group to each buy from different ones, this way all the stalls would get some trade 🙂

Mike, John & myself will be ‘bunking down’ with the same family on the home stay, so we went together to get our stuff. Mike’s impressive command of the Spanish language meant that we got exactly what we wanted – John & I ably assisted from the side lines: John pushing his camera up the nose of anything that moved, whilst I just stood there looking simple. No change there then! 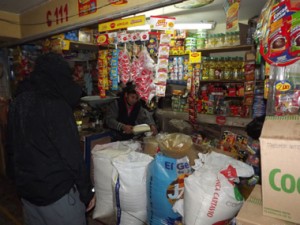 We regrouped at the market’s entrance & headed deeper in to the market – indoors this time. A fascinating & boggling display of goods met our eyes – I think you could have bought ANYTHING in that Market if we’d looked hard enough. All squashed in to amazingly confined areas – all fake I’m sure! Cameras… shoes… jeans… dvds… cds… hats… gloves… cycling machines…(!) Boggling.

The people here are so interesting to observe – I’ve taken to zooming in on local people across busy areas & I’ve got some priceless shots of people in all sorts of situations. There was a little boy outside the maket, playing in the rain, fascinated by it – I took a couple of shots of him. The children here are so photogenic – the people too, but the children are really cute.

After we finished in the market we headed back to the hostel in ‘Tuk Tuks’, which are essentially a little 50cc motorbike with a 3 seater cabin chassis attached. The frame of the cabin is just plastic, with plastic windows, & as you drive along – with your heart in your throat! – the cabin gradually fills with the fumes from the exhaust. It was a wonderful journey 😐

After depositing our purchases in our rooms, Mike, John & myself headed out to the local streets to look around. We found the inevitable Plaza Major & church, but the church was closed. We had a wander & came across a couple of local children – filthy! – playing in the square. Mother & father nearby, mother feeding baby on her lap. Out of his pocket Mike – or should I say Coco the Clown, children’s entertainer – produced a packet of ‘party blowers’, the ones where you blow it & it unravels & makes an irritating kazoo noise. After asking the parents if it was ok, he gave one to each of the children – they were delighted!

As we walked away, all we could hear behind us were the squeals of delight from the children & noise of the blowers going off! I’m sure the parents will be extremely grateful to Mike for giving them to the children… 🙂

We browsed the local shops a little & I was able to find a little something for Polly (shhhh – don’t tell her) & managed to successfully haggle 🙂 I also saw something else I liked for the family, but I’ll get that when we return here in a few days time. 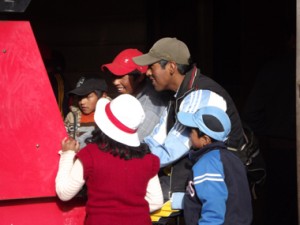 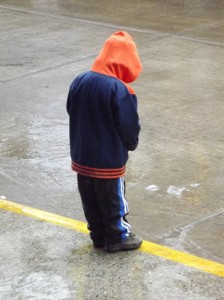 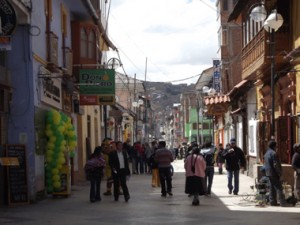 As we walked back to the hostel, we were joined by a note I couldn’t quite place. Possibly a G. We haven’t yet managed a full harmony, but it was good to have John along. I think we may have our quartet soon!

I managed to get internet (at last – yay!) just as we were leaving the hostel. I hung back while my emails downloaded – the ones from my Polly were the ones I was desperate to read. I kep watching where the crowd had gone, desperate not to lose them but equally destarate to get my emails. As my last email pinged in I ran up the road to catch up with everyone – they’d gone further than I’d thought & as I caught up with them, so did the altitude catch up with me. BANG! I wondered why I’d got some funny looks as I ran along – & thinking about it I couldn’t remember ever seeing anyone running whilst we’d been at high altitude… I guess this was why!

It felt like I’d done about 20 children’s songs in church, all at once – the most energetic ones too! It was hopeless trying to have a conversation with anyone as we walked, I just gulped in huge lungfulls of the little oxygen that was available & had just about recovered by the time we arrived at the restaurant. Make mental note – you are an idiot Warner, don’t do that again!

A delicious pizza later – & a good read through my emails (yes, at the table boys, but this was an exceptional situation – it doesn’t mean that you can start doing it at home!) – I was a happy chappy. Which is more than can be said for poor Toby, John’s grandson. News came in via one of my emails that he’s had a nasty fall off his bike & broken his wrist in several places – the same arm that he broke a while back. He’s had an operation to wire it all back together as best they can & returned home on Friday (yesterday). Brenda (John’s wife) is going to travel over by bus today (Saturday), so they need some big prayers for that whole situation – especially as Brenda herself is still working hard to recover after her op.

As all the youngsters headed off in to town to find a bar, Mike, John & myself headed back to the hostel to back our backpacks in preparation for the home stay tomorrow. Lots of warms I think! The freshly fixed internet access meant I was able to upload all the blog backlog so I was pleased with that. 11:00pm, lights out – late actually, by normal standards. We have a lie in tomorrow – breakfast isn’t until 7:30am, after which we head down to the port to get our boat to Taquile Island, after which we will travel to the peninsula Luquina Chico to spend the night with our home stay families.

As sleep isn’t particularly restful – or long – at this altitude, I’m going to try some FaceTime with my homies back in Bushby before breakfast 🙂