Well, 4:15am came around far quicker than any of us would have liked. Not helped by the party revellers under the window at 1:00am, the person in one of the adjoining rooms who decided to move all the furniture around in their room at 2:00am & finally the drum & bass that reverberated through both the hotel & our bodies at 3:00am. Apart from that we slept great & it was over far too soon.

Showers, frantic final packing – adding to & taking away – & breakfast at 5:00am. Bad news greeted us as we congregated – both John & Ruth had been up most of the night being poorly & Maddy was borderline being poorly too, but was managing to hold it together. We needed a plan – so Mike & I decided we would pray. We had to do it separately as neither of us had finished packing, but when we met up afterwards ready to board the bus we commented that we both had an overwhelming feeling that everything was going to be ok… more news on that in a bit 🙂

5:30am, we were on the road. 2 hour drive ahead to the town of Ollantaytambo (also known as Qoricancha) where we had a 20 min break to use the loos & get a final stash of snacks/water/choc etc – also to get rain ponchos which we’ve been advised are better to trek in than a rain mac… we’ll see! I bought a bright yellow poncho – it seemed a good idea at the time.

Back on the bus for the final part of the bus journey, we arrived at ‘kilometre 82’ at Chillca, where the passport control point was & the official ‘start point’, complete with sign 🙂

We pulled into a fielded area, disembarked & gathered together to collect our hired walking poles & sleeping bags. We were also given a small bag of ‘snacks’ consisting of some fruit, some biscuits & a couple fo boiled sweets – we would be needing these! In addition our main guide Henry (who we were introduced to at the breifing meeting in Cusco the day we arrived) we were also introduced to Enrique, Henry’s right hand man. Introductions over, it was time to ‘move out’ 🙂 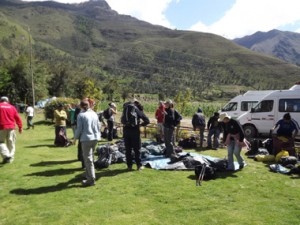 We then had to stand in the chilly shade of the outdoor checkpoint for 30 minutes, waiting for our paperwork to be checked 🙁 but at 9:15am – & after the obligatory group photo under the sign (on 15 cameras) – we were off! We crossed the railway bridge & followed the trail alongside the Rio Urubamba (Rio means River) & the railway track. We set a good pace & were all pretty close together – & would you believe it, John & Ruth’s recovery was coming on in leaps & bounds… good stuff this praying! 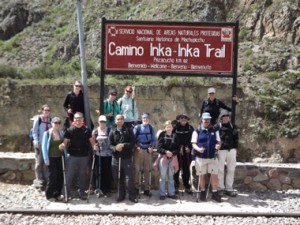 With regular stops to get our breath, drink water & to eat the fruit & sugar snacks we’d been given at the beginning, we covered the first part of the route in good time. Just before the trail split away from the both the river & the railway line, we reached ‘Llactapata’, home to the next largest Inca ruins when compared to Machu Picchu. Although deep in the valley below where we had climbed to, the ruins of the town were extremely clear to see & were incredibly well preserved. It was fascinating to see where the channels for water supply down from the mountains were, where the living quarters had been, where the livestock would have been kept, where the water storage areas had been, where the store houses were, where sacrificial offerings of animals would have been made – even the vast terraces on which they had farmed. It really was fascinating – & to think we were actually walking the exact same pathways the Incas had walked was just boggling.

It was at this point it started to rain. Great chance to try out my new rain poncho I thought. I got it out. I was disappointed to find out that it was basically a plastic sheet – similar to that you’d put on the floor if you were decorating a room – with a hole in the middle (which I had to stretch to get my fat bounce through) – with a very pathetic hood. As soon as a gust of wind came, the whole thing blew up in the air & all I could see was bright yellow. Unperturbed I made a slight change to the design & knotted the back bit to the front bit on each side with a knot about where my hips were. This seemed to do the job – even if I did look like a child’s bath toy. 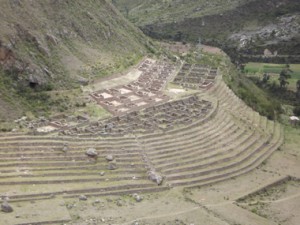 We set off to where we would be stopping for lunch – which was downhill from where we were. As I came down, the wind came up, I inflated & nearly took off! Again, all I could see was yellow! Fortunately, it provided everyone in the group with much amusement & I managed to negotiate the rocky path underfoot without breaking my ankle – not to mention getting blown off the side of the mountain. However, I did arrive at our lunch point looking a complete berk. But at least I was dry. The yellow rain poncho will next be seen at 60 Main Street when Jez comes to paint the windows 😐

We walked (one of us floated) across a small bridge, through a wooded area – & wow. There before us in what I can only describe as ‘animal eden’ were 2 tents – surrounded by virtually every animal you could think of. There’d were pigs, little piglets following, chickens, little chicks following, donkeys, dogs, little puppies following… the list goes on! But what was particularly fascinating was the hive of activity – it felt like there were people everywhere. One of the tents was the ‘kitchen’, the other was the ‘dining room’. The kitchen was where the head chef – Marco – & the assistant chef (can’t remember his name) worked their magic. All the other guys – of which there were 20 – were porters. Henry told us that Marco was one of the best chefs that GAP had, so we would be eating very well… 🙂

He wasn’t wrong. We dumped our backpacks on the groundsheet, washed our hands & waited to see just what could be cooked in the middle of nowhere half way up a mountain… 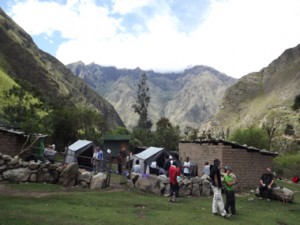 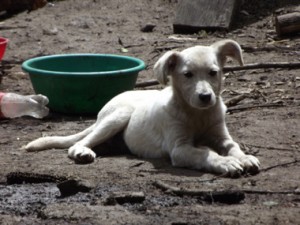 Out came the starter (!), a lovely vegetable soup. Next came the main course, beautifully cooked trout with fresh – yes fresh – hot vegetables, sliced potatoes & a lovely ‘sweet & sour esqe’ sauce. Lastly the pudding, a fresh strawberry mousse. All washed down with a nice cup of coffee at the end. I ask you – who could have predicted that little lot?! It was amazing & we all gave Marco a round of applause when he came to introduce himself to us afterwards. We’ll certainly not be going hungry this trek! I was starting to worry just how I was going to disguise this on the blog – after all, we’re supposed to be having a hard time here! I have decided that honestly is the best ploy though – the cat’s bound to get out the bag at some point otherwise!

After lunch, we had about 40 minutes before we needed to head out again, so some mooched around taking pics, others napped, others just had a walk around. I desperately needed 40 winks, of course, but knew if i lay down there would be no way i would be able to get up again! So I joined the moochers & i think i got a shot of every animal 🙂

Time up, we moved out again & started to hike quite hard – almost straight away – to reach the next viewpoint where we would be able to see ‘Veronica’ – the tallest Andean mountain in Peru – at 5682m. It was a hard hike – after being left to feel so pampered by lunch, the last thing I was expecting was a hard hike! I felt almost hard done to! The sun was at it’s hottest point as it was around 12 noon & we were hiking to around 2900m above sea level, so we were a lot nearer to it as well! By the time we reached the viewpoint I was a dripping, sweaty, soaking mess – even my head was sweating! It was sweltering – & I was being eaten alive by mosquitoes, because I’d forgotten to bring any mosquito spray. Derrr. 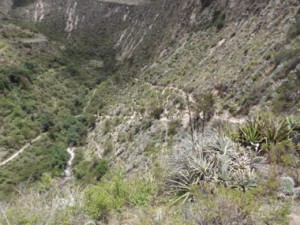 However, within minutes of stopping – especially because we’d stopped in the shade – body temperature dropped & the wet clothing became freezing cold! However, we got some nice shots of Veronica – it was lovely to meet her – then we set off for the last push to our campsite at Huayllabamba sitting at 3100m above sea level, by which time out trekking for the day would complete & we would have climbed approximately 700m (2310ft).

We duly arrived at the campsite & again were blown away by the efficiency of the team – especially the porters. These guys must have superhuman strength. In between us setting off after lunch, they had decamped the lunch venue – in its entirety – overtaken us, set up camp here including all the sleeping tents, the eating tent & the kitchen tent, & were there to greet us with smiling faces as we staggered in through the gateway! Phenomenal.

Before we went & sorted ourselves out in our tents, Henry gathered us all together & we spent some time being introduced to the team – including their names, their ages, where they were from & their marital status (nearly all were single!). After this we introduced ourselves – in Spanish (ooh, get us) – with name, age & where we were from. The ladies were each asked their marital status & the men were asked if they had any single sisters at home! I didn’t realise it was that kind of trek! 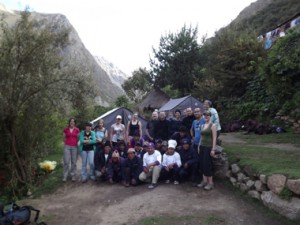 Afterwards we went off & got ourselves sorted in the tents, freshened up (including feet!), then went to the food tent for tea at 5:00pm – FRESH POPCORN! Made from Peruvian corn & accompanied by bread, strawberry jam & hot drinks 🙂 It just keeps getting better… & more surreal by the minute! Salted popcorn, at 3100m, in the middle of the Andes… wake me up will you?!

An hour & a half later we sat down to dinner. A beautiful soup to start, with more fresh vegetables, potatoes, omelette pieces (?!), chives… then we had fresh chicken with yet more fresh vegetables. Wonderful. No pudding – which is what I guess ‘tea’ does & means the guys can clear all the food stuff away, get washed up etc & have the food tent cleared ready for lights out by 8pm. The sleeping arrangements for the porters are organised by raffle – 19 of them (not 20 as the head porter has a tent) draws lots for sleeping position on the floor of the food tent. The table are folded away & they bunk down on a ground sheet – the best lot apparently the one in the middle as it’s the warmest!

We all teeth brushed & ablooted & everything went very quiet, very quickly. That was until 3:00am when the dogs started barking, then the cockerel started at 4:00am.

The tents are 2 person & are very small, so it’s interesting trying to juggle backpack, boots, walking poles, duffle bag, sleeping bag & emergency supplies in case you get ‘caught short’ in the night – which I did of course! Then the zip got jammed & I couldn’t get out. Stupid cockerel – my body was nicely shut down until he started, then he wouldn’t shut up. You know what it’s like when you wake up & can’t get back off… well, if you’re old like me you will 😉

Then, before I knew it, it was…