So let’s start with the casualties. First, I took my Kindle out of my bag last night, for just a little bed time reading before lights out (at 9pm… rock’n’roll baby) and found it had been smashed ????. This is my trusty & faithful third generation Kindle, with keyboard, that has travelled many, many miles with me & I’d even hacked it so that instead of those awful stock images that come up when you switch it on, mine had a beautiful picture of little Owen when he was beautiful. I mean younger.

So that was obviously very upsetting. So instead I had to play solitaire on my phone. And I didn’t win one game out of the 7 or so I played. So I was not a happy bunny by the time I turned the light out. Well, actually the light stayed on, I just put my blackout eyepatch things on… & put in my ear plugs… I’ll come back to this in a bit.

Second, I put my boots on this morning just before we were due to head off for the day & my flaming sole came off! I’d literally walked the sole off my boot!

Now this was also very sad, because these boots had been with me since my very first expedition back in 2010 to Everest Base Camp. Since then they’ve done many many miles, both with & without dogs, & to see them in such a sad state was extremely upsetting. What proved to be even more upsetting was the fact that they couldn’t be repaired & I had to buy a new pair! And EVERYTHING in Switzerland is expensive…!

Yesterday we’d seen a climbing shop in the town of Champex Lac as we walked through. As it was 1.5km back the way we’d come, we managed to bag a lift down the road with the man who’d come to collect the bags (see what I did there…?). Also fortunately, the shop was open when we got there at 8.30am. The owner was delighted to see us when we explained our predicament.

Anyway, to cut the story to the point, the old boots have died & been left in Switzerland. I now have new boots in which I can have all sorts of crazy adventures… & they are quite sexy ???? 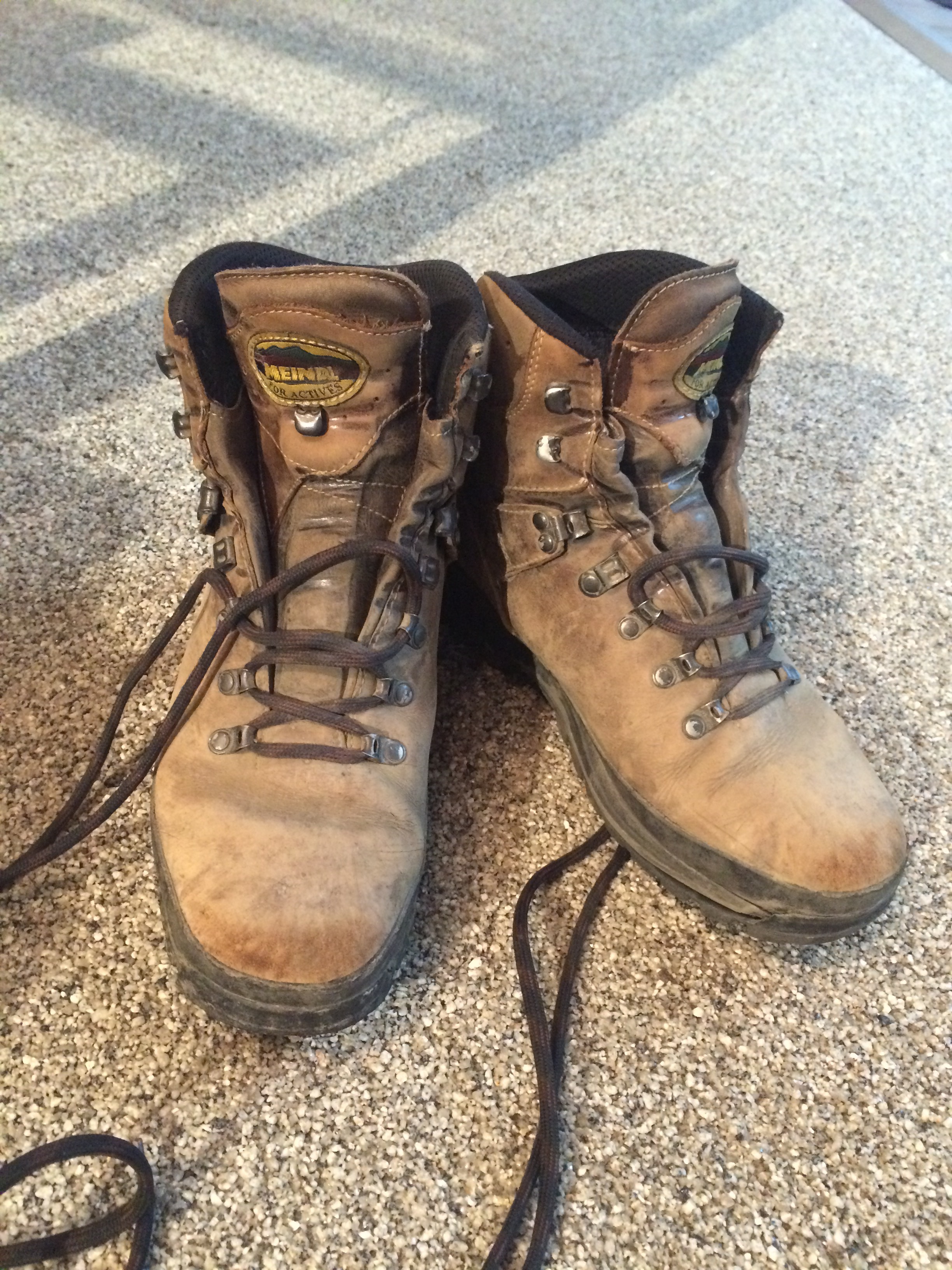 And the new ‘space boots’:

The combination of these babies, with my beard relish, should make me absolutely invincible!

So after a delay of about an hour we eventually set off & fortunately no more casualties ensued. My iPad is travelling with me in my rucksack from now on that’s for sure!

I think I mentioned yesterday that today’s climb would be “leisurely”. Well that was silly of me wasn’t it?! It was far from leisurely & – after the drama/trauma of the Kindle/boots – I was in a thoughtful mood as I tackled all the ups, downs & arounds that today had for me. I decided I would form two lists – one for things I like about trekking here, and one for the the things I dislike about trekking here. So I’ve made a start, I may have more to add as the next three days go by… in my head at least!

I’m sure I will think of more – especially the dislikes!

So I mentioned I would come back to the light being left on in the room. Well, I said yesterday that we had a 6 person dorm to ourselves. After finishing the blog I went to return my stuff to the room. I walked in to what I thought was our room & found it to be full of foreign people, so I apologised, turned around & left. As I retraced my steps I realised that I’d gone the room right after all but that it was full of foreigners!

So, I turned around & returned to find out who they were. Turns out they were late bookers & had been put in with us. As I was talking to them I was, as discreetly as possible, removing all our pants & socks that were hanging from their beds drying… I think I got away with it, they didn’t seem to notice!

Turns out they were from Israel, & we spent a while chatting about treks we’d each done. I can’t remember their names but there was one guy & two girls.

Later, Mike & I turned in before they did & while Mike was lying in his lower bunk reading, the guy was leaning against it talking (very loudly) to the girl in the bunk above. Mike spent a lovely half an hour staring into the guy’s groin.

They were quite late turning the light out, hence the eye covers & ear plugs, but when we awoke in the morning they were gone! It was all a bit odd & strangely surreal!

So today is our last full day in Switzerland – tomorrow we cross back in to France. We are staying in a small town called Trient tonight, in a lovely old building converted to dorms. It’s very nice.

After a day walking in new boots my feet are very tired, although they were comfortable enough. I could do without ‘live walking’ in them until I’ve worn them in a bit. But, hey-ho, it is what it is right? At least they look good!

Just three more whole days left until we complete this. Although today wasn’t as hard as some of the days, it was harder than I’d been expecting. Sometimes, although the ascent isn’t massive, the perception can be that it won’t be tough. But these mountains are massive, & there are very few ‘gentle gradients’, so even if the ascent is ‘small’ the steepness of the angle to get you there can just knock your legs from underneath you – literally! And today was a bit like that. We did it though & we both agree that we feel far fitter than when we started!

Tomorrow is Stage 9. 13km, ascending 1069m to 2201m, before descending to 1417m at Tré-Le-Champ. We should cross over back in to France around lunch time. Although not a long day in terms of distance, there are two bigs climbs in the day. So I think my feet will be even more tired tomorrow night. But hey, at least they look good right?

Ok all, bed beckons. Hope all’s well where you are. I’ll drop a couple more pics in below before I head off. 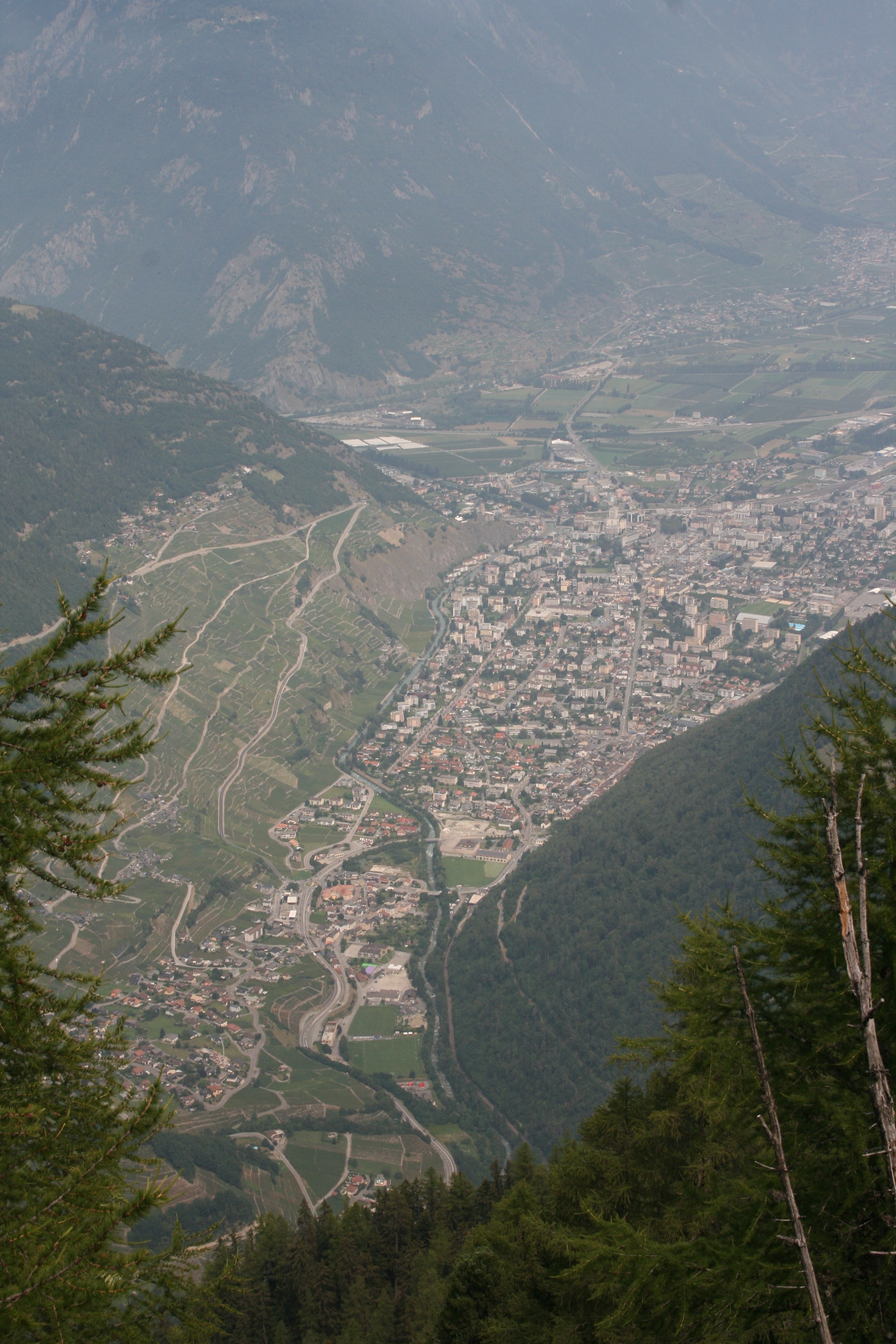 One of ‘those views’ that just pop out at you…

Above the clouds, literally. It really does take your breath away. 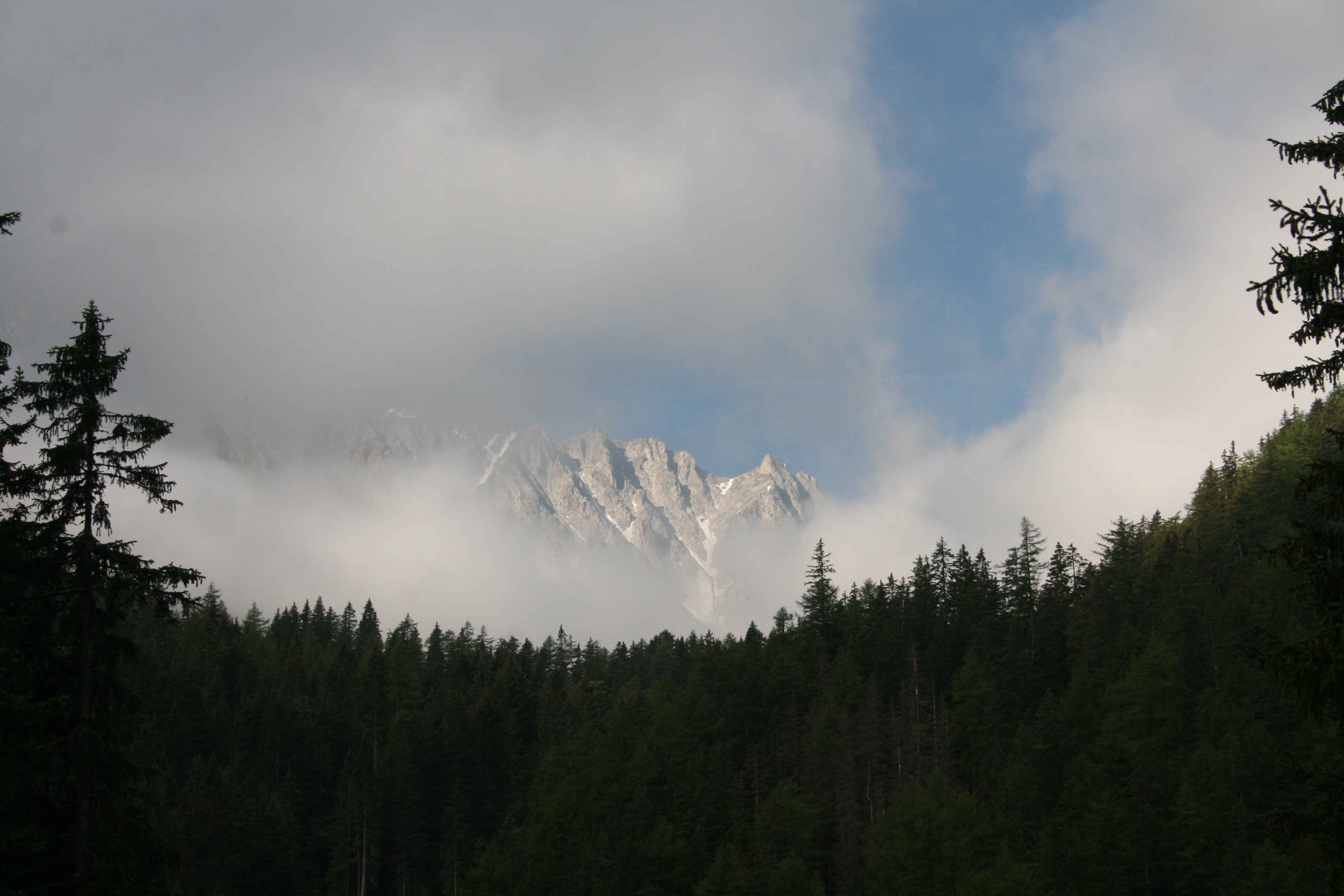 And sometimes you happen to look up, & there’s a big mountain!