Day 8 – a condor moment in the Colca Canyon.

Bang on the door ‘wakey wakey’. 5:30am. No morning tea – harsher conditions than Base Camp! At least we got morning tea when we were woken early there!

Why so early? Today – before visiting the second deepest canyon IN THE WORLD, we are going to see the Andean Condors in their natural habitat at a place called Cruz del Condor. Not only do we hope to see them but we hope to see them flying through the canyon – close up! The condors only do this at a certain time of day – if we are too late, even by 15 minutes, we’ll miss it. Then the chance will be gone & we won’t be able to get it back.

With Brianna still not good, we left her back at the hostel resting, but everyone else climbed aboard.

Condors are magnificent birds. With a largest recorded wingspan of 3.85m, they among the largest birds IN THE WORLD.

When we arrived at the viewpoint, many many other tourists had exactly the same plan & it was packed. But there, on a ledge, were about 5 condors. One by one they would drop off the rock ledge on which they were perched & pick up a warm air current, then soar over our heads near enough to touch, or so it felt. I waited patiently behind a couple who had a very good view at the front of the railing, when they moved I was able to get some really good close up shots of the birds as they perched. As they flew I managed to get some too, but they were soo fast I will need to look at them more closely on my iPad to see whether they are in focus. What magnificent birds. 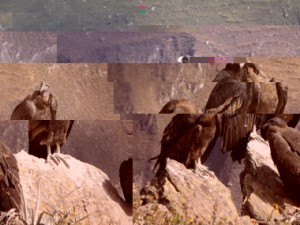 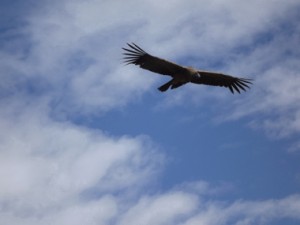 One by one the condors left, until it was just a bunch of tourists on a rock ledge. It was a surreal moment though – & it felt like I’d been part of a really special moment in time. I can’t wait to look at the pictures!

From here we embarked upon another, shorter, trek. Just over an hour, along the edge of the Canyon.

Colca Canyon, at a depth of 4160m, is twice the depth of the Grand Canyon. The 100km long Canyon is set among high volcanoes (Coropuna at 6613m & Ampato – where Juanita was discovered – at 6310m being the two highest) & ranges from 1000m to over 4000m in depth. Where-ever we looked beneath us, terrace after terrace covered the slopes. All rich & green in colour, all contributing towards the independent eco-systems within the Canyon’s walls. As we walked we were amazed by how plush the land around us was – how green. Thousands of cactus, flowers, insect & bird activity – just incredible. & the views down the Canyon itself… wow! 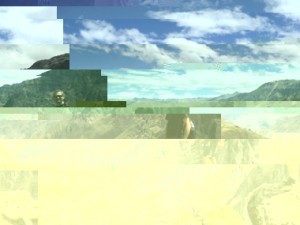 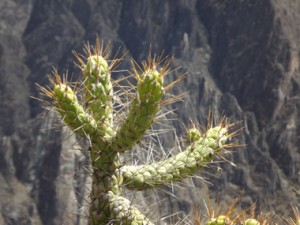 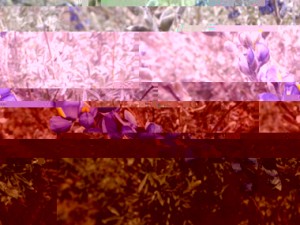 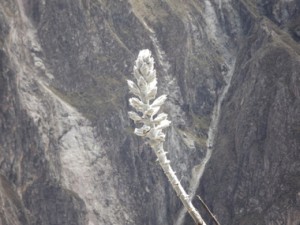 Returning to the bus – E flat – we drove on to the village of Chivay for lunch. A combination of the altitude & the packet of chocolate covered biscuits Mike gave me on the bus just minutes before, meant that I wasn’t too hungry. So, whilst everyone else tucked in to the buffet of Peruvian delights, I was content with chicken & noodle soup… at least I think it was chicken… 😐

After lunch we headed back to the hostel, with a brief stop at Civay’s Plaza Major. Even here – in this tiny rural village – the inside of the church was adorned with the gold leaf covered frames & figurines. Outside, the usual stalls selling souvenirs, but a new addition were the animals. Sadly, animals & birds are captured & used as a means to earn solas (Peruvian currency). Tourists come, take photographs of the animals, & pay some solas. But it isn’t legal. Animals such as alpaca & small lambs, birds such as hawks, are tethered at the roadside. We have been asked not to take photographs of these animals as a gesture of protest.

From Chivay we headed again back to the hostel for a bit of free time. Mike had a catch up kip & an F Sharp Major whilst I blogged & joined in with the odd E Flat.

Our last excursion of the day was to be a trip to the hot spring pools of La Calera. The water of the springs is heated using the sulphur from the neighbouring (active!) volcano.

As we stood waiting for everyone to gather before boarding the bus to the springs, Mike & I looked at each other & commented that we didn’t much fancy sitting in an outdoor swimming pool & standing around in wet swim shorts at these sort of temperatures. Even though we stood there in fleeces & long trousers, it was still pretty parky. However, we collected our towels from reception & boarded the bus.

When we arrived, the first thing that struck me was the terrible pong. Bad eggs. That, of course, was the smell of the sulphur. As we descended in to the pools area, all around us were gullies containing steaming water that was coming out from holes in the rocks everywhere. These gullies then fed into a network of pipes that went on to distribute the water around the site. It was only a small site, but quite surreal – one minute we were driving along a bumpy, rocky dirt track, the next we were standing amongst hot water pools surrounded by mountains & volcanoes!

We collected a locker key, took a deep breath, stripped down to swimmers &, after a quick rinse in the shower, in we went. It was breathtaking – literally. The water was sooo hot – hotter than the hottest bath I think I’ve ever had! We ordered some drinks – mainly cactus juice would you believe! It was delicious – then just sat back & relaxed. It was amazing. After a few minutes it became too hot so I decided to hotch up on to one of the steps that ran around the outside of the pool. I had thought I would be cold, but as I sat there bottom half in top half out, it was just perfect.

One of the pool attendants wandered around, attending to things, zipped up to his chin with fleeces & thermals, & there we were with just our swimmers on, half submerged, drinking cactus juice… madness!

As I sat there, I looked around. Mountains & volcanoes surrounded us on all sides, steam rising from the surface of the water. It was just surreal, totally surreal. I thought about my Polly & wished she was there with me so we could have shared the moment…

Then, as if it couldn’t get any more obscure, a bloke recognised Mike & swam over for a chat. Turns out he used to live on Spencefield Lane in Evington, a few doors down from Mike, & worked for Mike as a trainee vet back in the mid nineties! How amazing is THAT! Of all the pools, in all the world… or was that bars?! Small world 🙂

It was hard going getting everyone out of the thermal pool I can tell you, but once out the need to get dry & dressed was a very very urgent one. The warmth of the pool vanished in minutes – as did some other things…! – as we stood dripping wet in the chilly air, swimmers getting colder by the second. A very quick dry off & change back in to trek-wear meant we didn’t stay cold for long. A warm fuzzy feeling had decended upon the bus as we travelled back & we didn’t even mind the driver’s obscure iPod playlist – which prior to that point had become a bit of a drain to say the least. I don’t think it’s that anyone minded Madonnas, Bon Jovi & Michael Jackson per se, but mixed together, – on the same playlist? What’s that about?

Anyway, we sang along to ‘You give love a bad name’, ‘Thriller’ & ‘Material girl’ all the way back to the hostel 🙂

The hot springs had left us all so chilled out that not everyone appeared for the evening meal, opting instead to an early night. A chunk of those who made it to eat stayed on to watch Peru vs Paraguay – a 2-0 victory to Peru, much to the delight of all the Peruvians there! The normal celebrations that I feel sure would normally have followed were tempered out of consideration for the guests of the hostel, but I think the odd bottle of Inca Cola was clinked in celebration!

With an early start AGAIN tomorrow, I decided to retire early to pack up my old kit bag & smile smile smile. Tomorrow we’ll be up at 6:00am ready for a 7:00am departure as we retrace our steps from a few days ago & pick up the Pan American Highway to Puno, next to Lake Titicaca – & get internet too! Yay! It’s a 6 hour journey which will pretty much be constant with the odd loo stop. Hopefully we’ll see some Andean geese again at some point… 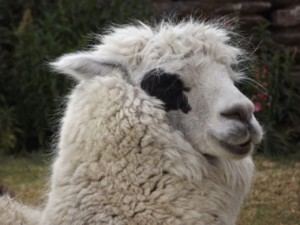