So, I guess we may have missed that particular line in the guide book, otherwise I wouldn’t have gone to bed feeling quite so positive! I can say one thing for the book… it’s very accurate!

But before we get to that, there was the night in my very first proper mountain dorm refuge. Prior to this point we’d been sleeping in twin rooms, but Rifugio Maison Vielle was a whole new experience for me – & well outside my comfort zone I can tell you!

Not a large establishment, but with a full house of 50 guests it was very full. However, there were only 3 toilets (1 sitter, 2 squatters), 3 showers & 4 sinks. So you can imagine (a) any kind of ablution was a challenge & (b) even the thought of needing to ablute made me very nervous.

Having had prior experience of the ‘squatters’, my preference was obviously the sitter. However, the lock on the door was broken. Which made for a nerve-wracking, if not somewhat short, first attempt. So prior to exiting said cubicle I did some rough mental measurements of the exact size of ‘thing’ that would be required to slip in to said broken door lock to make it hold fast. I then went in search.

It was whilst shuffling around in the porch area that I came across just the thing! Similar in size to a small cake candle I found a tooth in-between cleaning thingymabob that someone had left behind – perfect I thought! (forget hygiene issues, I did, the door lock was way more important). Fortunately, said thingymabob was safely enclosed inside its own plastic tube, so I was safe. Upon returning to the cubicle I found that the thingymabob was indeed a perfectly snug fit… however, I was concerned then about not being able to get out. So I went & got my penknife out of my backpack.

Now I was ready for business (pardon the pun). Everything went very well. A success all round thank you. The thingymabob was duly retrieved from inside the lock by my trusty penknife & has now been added to my essential backpack kit. You never know when it might come in handy again!

Whilst on ‘toilet talk’, I really must share the night’s sleep experience before moving on to today. I was curious to know how it would work with that many people all sleeping in one room – would it sound like a cattle shed, with mooing & neighing all over the place? what was the etiquette with any noises one might need to make? how much movement was one allowed to make if one’s bed was a very noisy one?

Well, after finishing the day’s blog, nearly everyone had gone to bed already by the time I went in. The heat was absolutely stifling. But all was quite. I made my way up to my bed (top bunk as we were one of the last to get in) & arranged myself so that everything was within reach – I’d worked out a clever way of wedging all my things around the outside of the mattress, so I knew where everything was. Then I got myself comfy & waited.

It remained very quiet for a little while, with only the odd whinny. But then the moment came, & someone let one go. I couldn’t be sure where it came from but I’d guess at the large lady in bed 3. She’d been looking very uncomfortable earlier. But it was as though that was the permission that everyone had been waiting for – what followed could only have been bettered by the Grimsby Colliery Band! And boy did the gates open.

It’s childish, I know. And I accept that. But it was totally priceless – and scenery aside will probably be one of my lasting memories of TMB!

Funny as it was, the room temperature only increased as a consequence, which made for a very uncomfortable night… if not one of great relief.

So enough of the toilet talk, on to today. As my opening paragraph implied, today was yet another tough one. But it started out well with a short ride down from the Rifugio to the town of Courmayeur by chair lift. The walk down would have taken over an hour & the path was not a good one – very dusty & loose under foot. Not to mention the severe incline, so we decided the time saving would be worth it. We are both very very tired & today was already set to be another hard one. I’ve never been in a chair lift, so it was a great experience for me. It felt like an almost sheer drop down through the trees – the view was incredible.

Arriving in the town we then braced ourselves for the dreaded climb up to the highest point of the day – an 860m climb in 2 hours. We were already carrying extra weight as tonight’s rifugio has no access other than by helicopter, so our bags will not be there when we arrive. So we had to pack our backpacks to not only include what we needed overnight, but to also include clothing & supplies prepared for a worse case scenario weather-wise. Which made the rucksacks VERY heavy.

The climb was brutal. Persistently loose underfoot, knee high trees roots & rocks to climb up/step over, sheer inclines (some you could reach out & touch the ground in front of you they were so vertical), the heat… you name it. Sometimes we could only walk a few steps before having to stop for water & to regain strength. But we made it. I don’t think either of us would say it was enjoyable, but it was necessary.

From here the rest of the journey to Rifugio Bonatti was very pleasant. There was a small 300m ascent along the way, but it actually felt easy in comparison to the earlier climb.

We arrived about 4pm, were allocated our room – a normal twin thank goodness! – & set about enjoying a well deserved pint of beer surrounded by amazing views. The rifugio faces one of the most intense glacial rock walls I have ever seen. It is just VAST. To sit beneath it, drinking a pint of beer, was quite surreal. Mike & I acknowledged that this would be the first & last time we would ever do this. A totally unique moment.

As I sit writing, at 9.48pm our time, everywhere is silent. Everyone has turned in. Everyone is exhausted, me included! Breakfast is at 6.15am tomorrow (5.15am your time), after which we’ll be heading off – with our very heavy backpacks – to complete Stage 6 of the Tour du Mont Blanc.

A cool 20km, ending up in La Fouly… in Switzerland! The hardest part is in the middle of the day, when we’ll go from 1750m to 2537m in just 2.5 hours. But the views promise to be on another level as we leave the intimacy of being so close to the mountains in exchange for the breathtaking beauty of the broad open slopes of Switzerland.

So far I have sunburn on my forehead (again!), my arms, the back of my neck & my calves. My muscles ache in places where I didn’t think it was possible. My calf muscles have started to look like they’ve been glued on they protrude from my legs so much. And I think by the end of this my shoulder muscles may look like Tom Hardy’s… well, maybe not. But I’m happy – SO happy. This is an amazing adventure. Was a beautiful, created world we live in.

No wifi tonight so will upload tomorrow, with some pics. 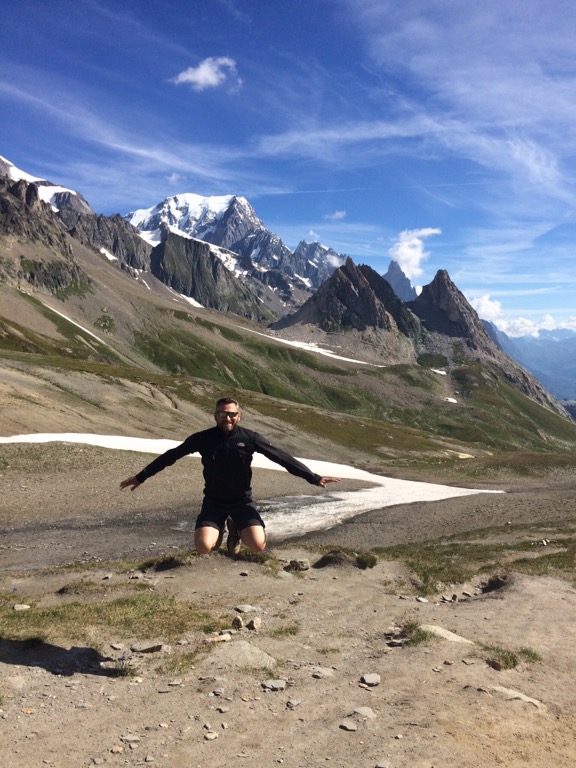 That there is Mont Blanc! France to the left, Switzerland to the right… idiot in the middle (only just had enough energy for that jump!) 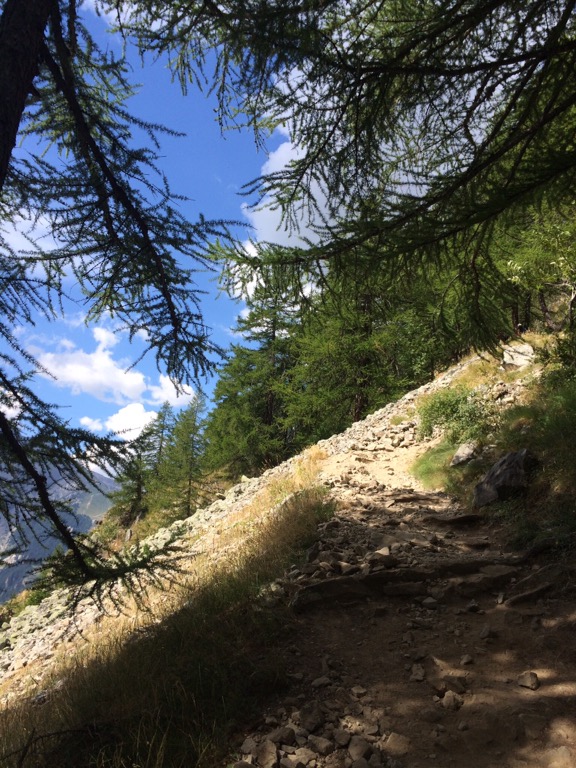 This was the walk of hell – check out the angle of the trees compared to the ground! This walk went on for ever! 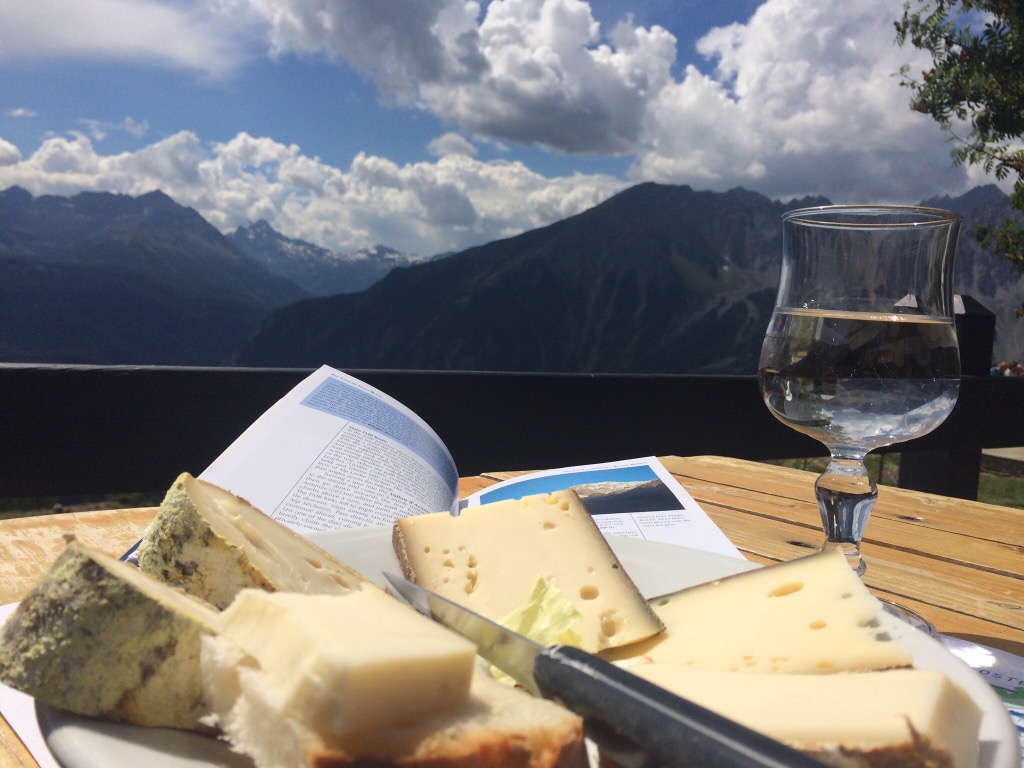 And at the end of THAT walk, cheese & water. Was BEAUtiful! Not a bad view either eh…?