What a fab day!

I’ve bonjoured myself almost to death, not to mention the a droits & the a gouche’s! But this has been by far the best day, achieving everything we set out to achieve, that we missed in those last few days when we came 2 years ago.

It all started with a very restful night’s sleep, albeit in a dorm with 20+ people in it, of all ages. The chap in the bunk above me looked just like the 118 guy with glasses. I so had to control myself. The impulse to smirk was quite overwhelming. But I managed it. Just.

I’d rammed my earplugs in v far, so couldn’t hear a damned thing. Which was great. Initially I was guarded about the enthusiasm with which I released the natural gases created by the French refuge cuisine, as I couldn’t actually hear them. But then I figured I was safe in the anonymity of such a full dorm, so became far less cautious. Then I was aware I could actually hear them through my ear plugs… but I ran out of steam, so to speak, shortly afterwards so all was well.

Breakfast was easy to negotiate – Corn Flakes, croissant, juice & coffee. No vegetarian option to be seen. Ablutions followed – not in the breakfast area, obvs – & we were on the trail in good time by around 8am.

What a beautiful morning it was. Views like this just kept jumping out at us: 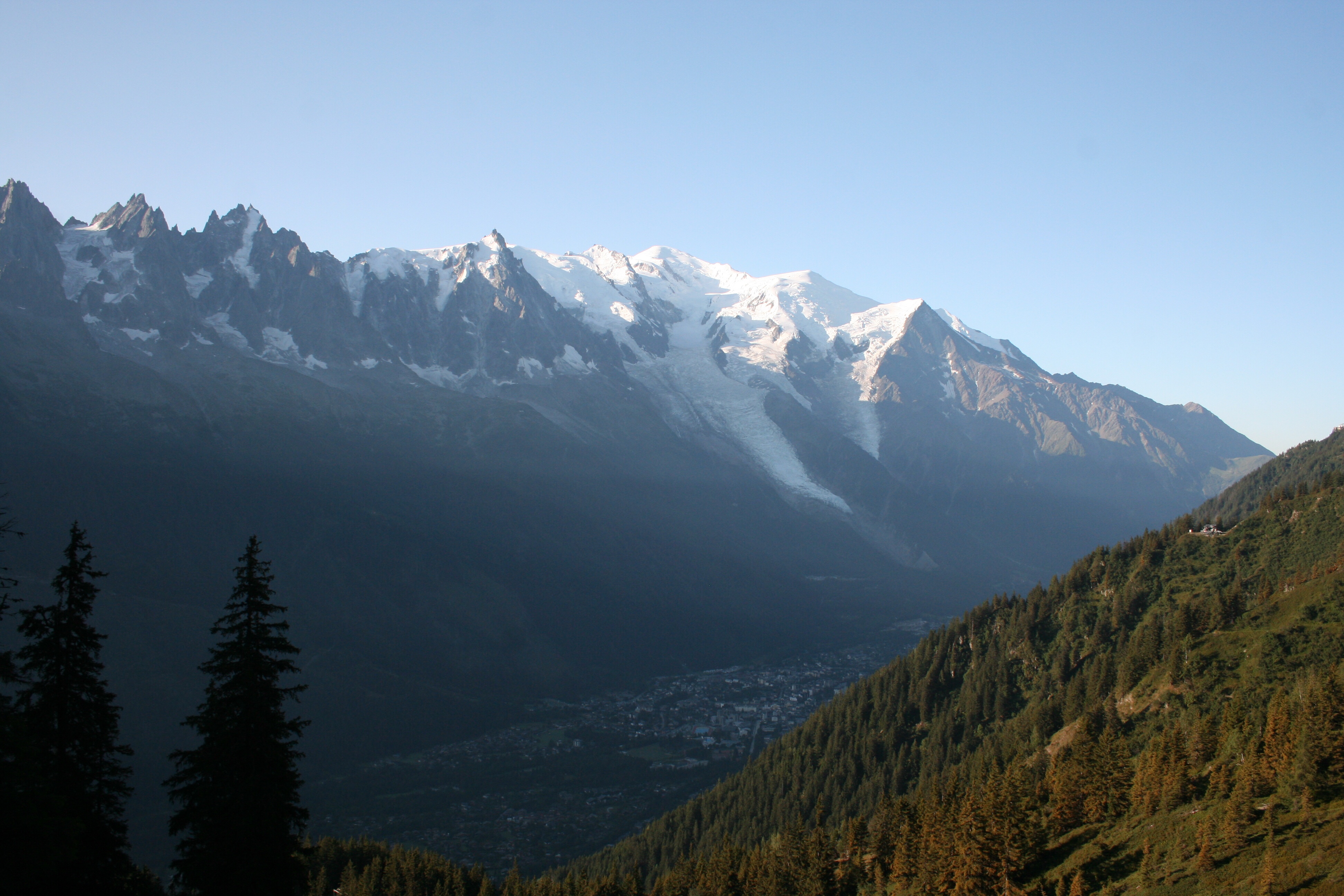 We made good time – & the knee just felt great – so we reached Planpraz within a couple of hours. What you might envisage as a typical ‘Alpine path’ along mountainside edges, however, is not entirely what we experienced. Some of the paths were more than a little tenuous in description & we needed our wits about us on more than one occasion to avoid falling off the edge & arriving in Chamonix much earlier than anticipated! 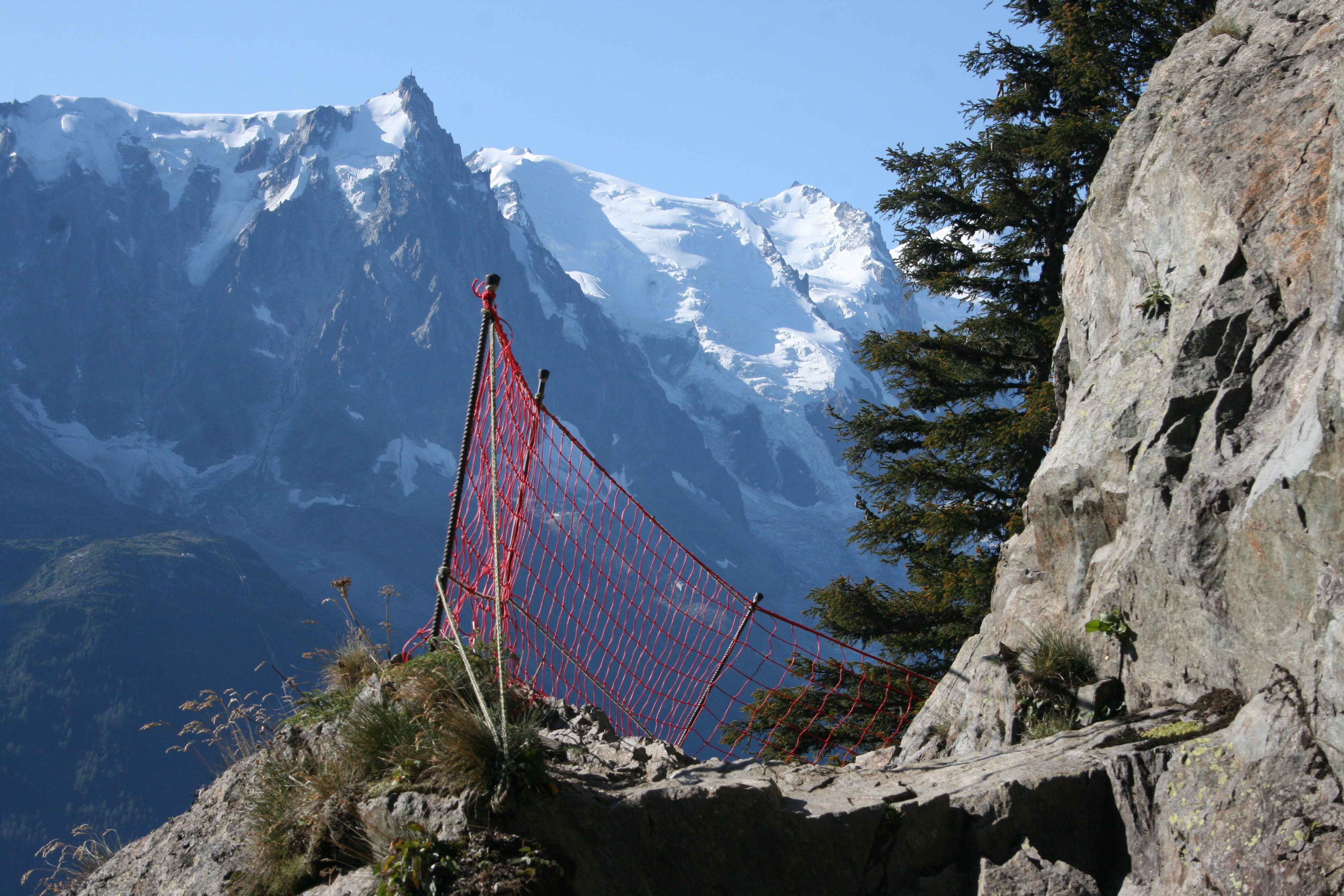 This one was about 12″ wide at its widest point, but you have to look hard to see it. And yes, that’s Chamonix below! 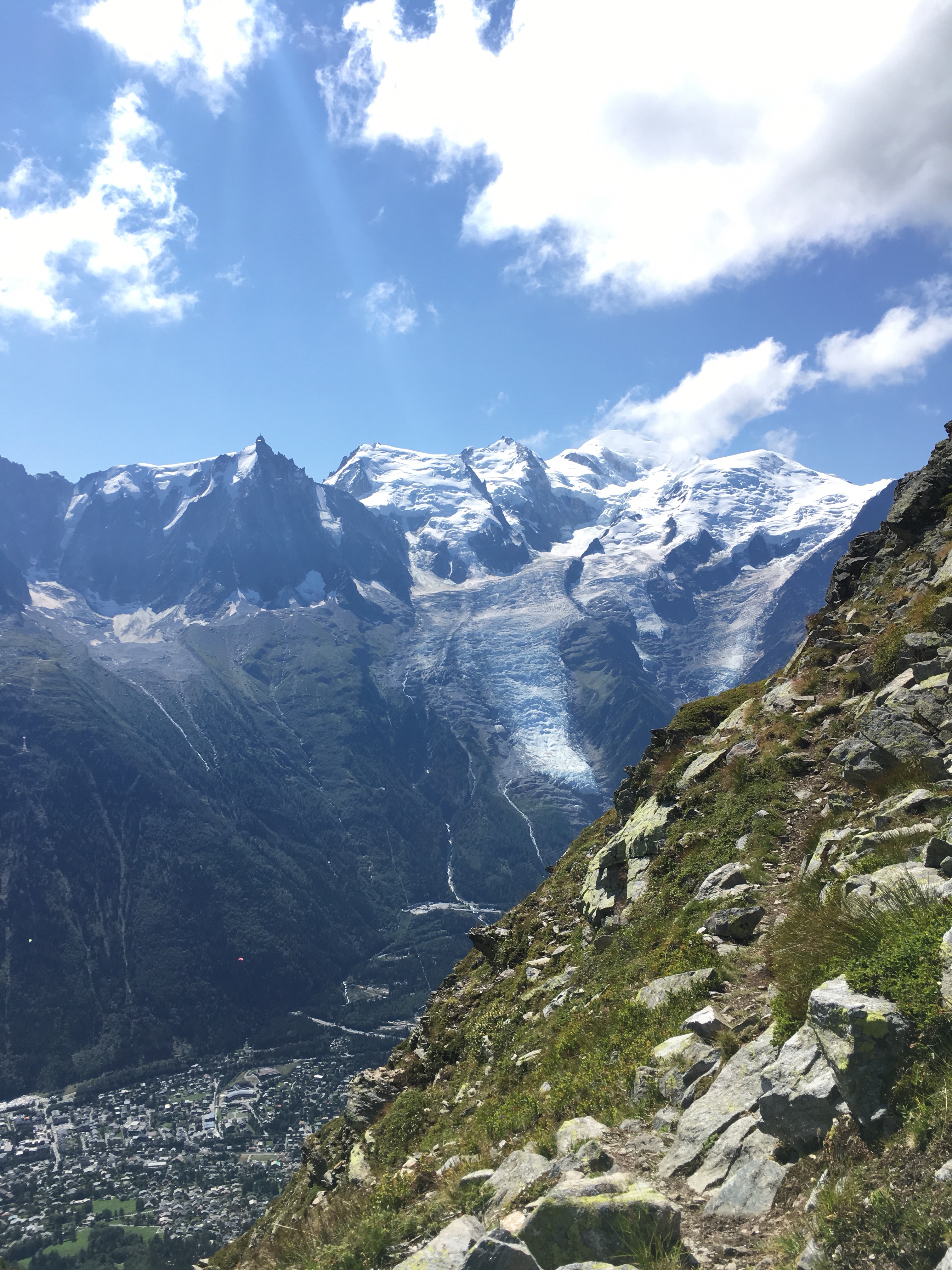 At reaching Planpraz, at 2000m, we sat to deliberate & have a bite to eat from our packs. The question was, to take the cable car down from here in to Chamonix & call it a day or to carry on to complete the part of the trail missed before – the gruelling 526m climb to La Brévent. You know already which we chose don’t you?!

What a climb it turned out to be. It threw everything at us – chest bursting gradients, scorching heat, muscle sapping boulders, rock scrambling, ladders, snow, annoyingly happy people coming down… but we made it! And so many rewards both along the way & when we reached the end. 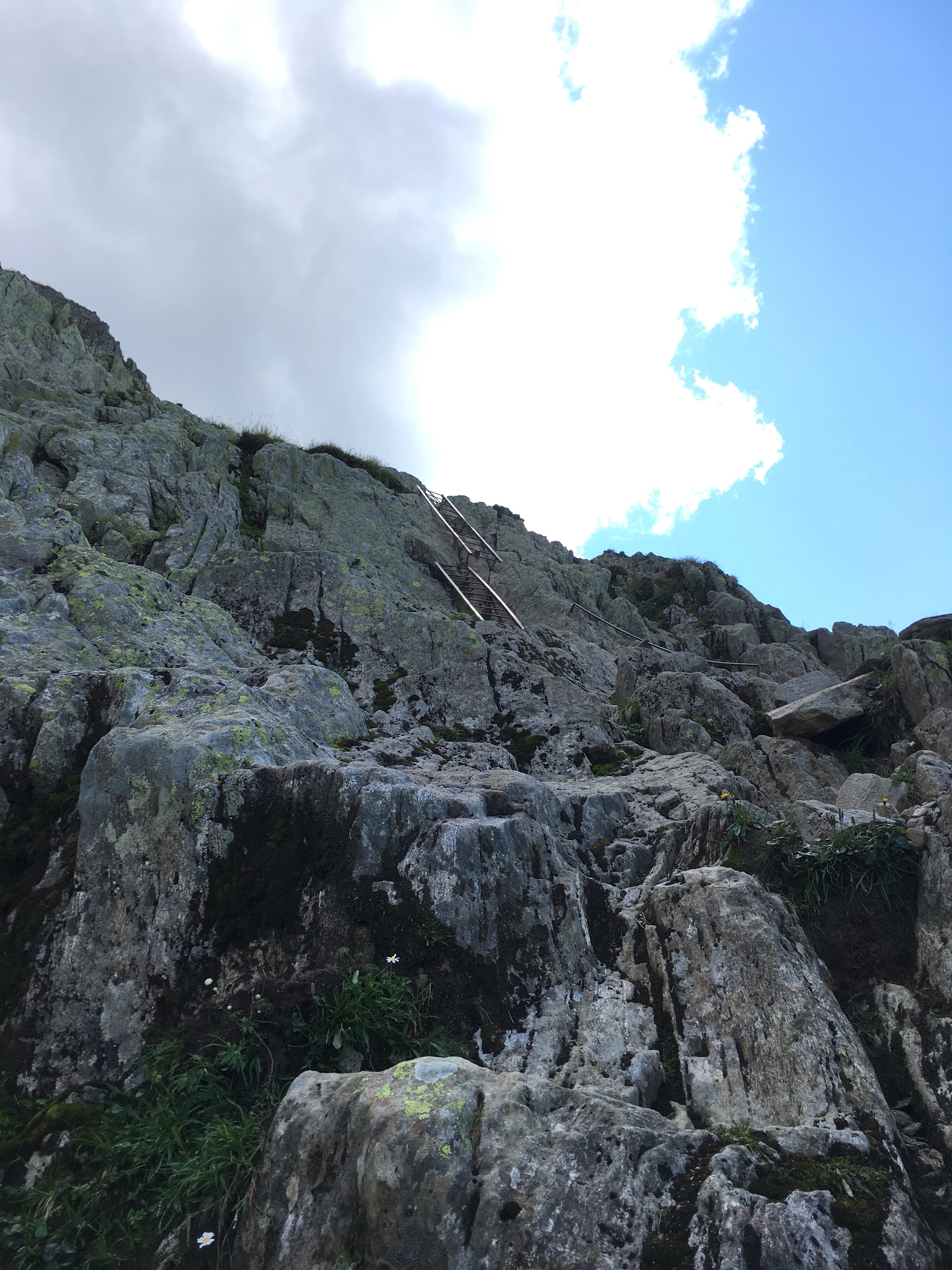 One of the greatest rewards for me was the introduction of ham & cheese to a pancake, which we had at the small cabin along with a strong espresso on arrival at La Brévent.

Suitably chuffed with ourselves we took the cable car down to Chamonix (having already done the 1500m decent on foot once before & not feeling the need to do it again!) & made our way to the hotel. Although the room we’ve been given has a balcony (just 1 chair) with a great view of Mont Blanc, it’s also on the main road, on the first floor, just above a bar & opposite a bottle recycling bank. So those ear plugs will be going in hard again.

There’s also no air con, which means the windows need to be open. Certainly makes shower time interesting anyway! Certainly put those eating in the restaurant opposite off their stride…

After locating our bags from the drop off, we showered & changed & went in search of a new pair of shorts for Mike after he’d managed to bleed all over his following a brief altercation with a tree earlier. We found a sports shop & I played mother, supplying him with endless pairs to try on in the changing room. Eventually we found a suitable pair & Mike decided to keep them on. I left him to pay & went to wait by the door for him to finish.

I became aware of a small commotion at the pay desk & turned to see 2 non English speaking shop assistants trying to ascertain whether the shorts Mike was wearing had a security tag in them… around the bottom area… that required a hand inserting into the shorts to release. I obviously stepped forward to help the situation, to which I received a thankful yet slightly confused look from one of the assistants. I explained in my (fluent) French that we were together, but not together, & that Mike was fine about me putting my hand down the back of his shorts.

We left the two assistants in hysterics as we exited the shop.

A nice meal followed, in Mike’s new shorts – well, not in them obvs, but they were present. Probably one of the most expensive meals I’ve ever eaten, which I can’t share as Polly may read this. But I will tell you that a 75cl bottle of beer was £12! There’s a joke there somewhere about a very expensive Blonde, but you won’t hear it from me…! 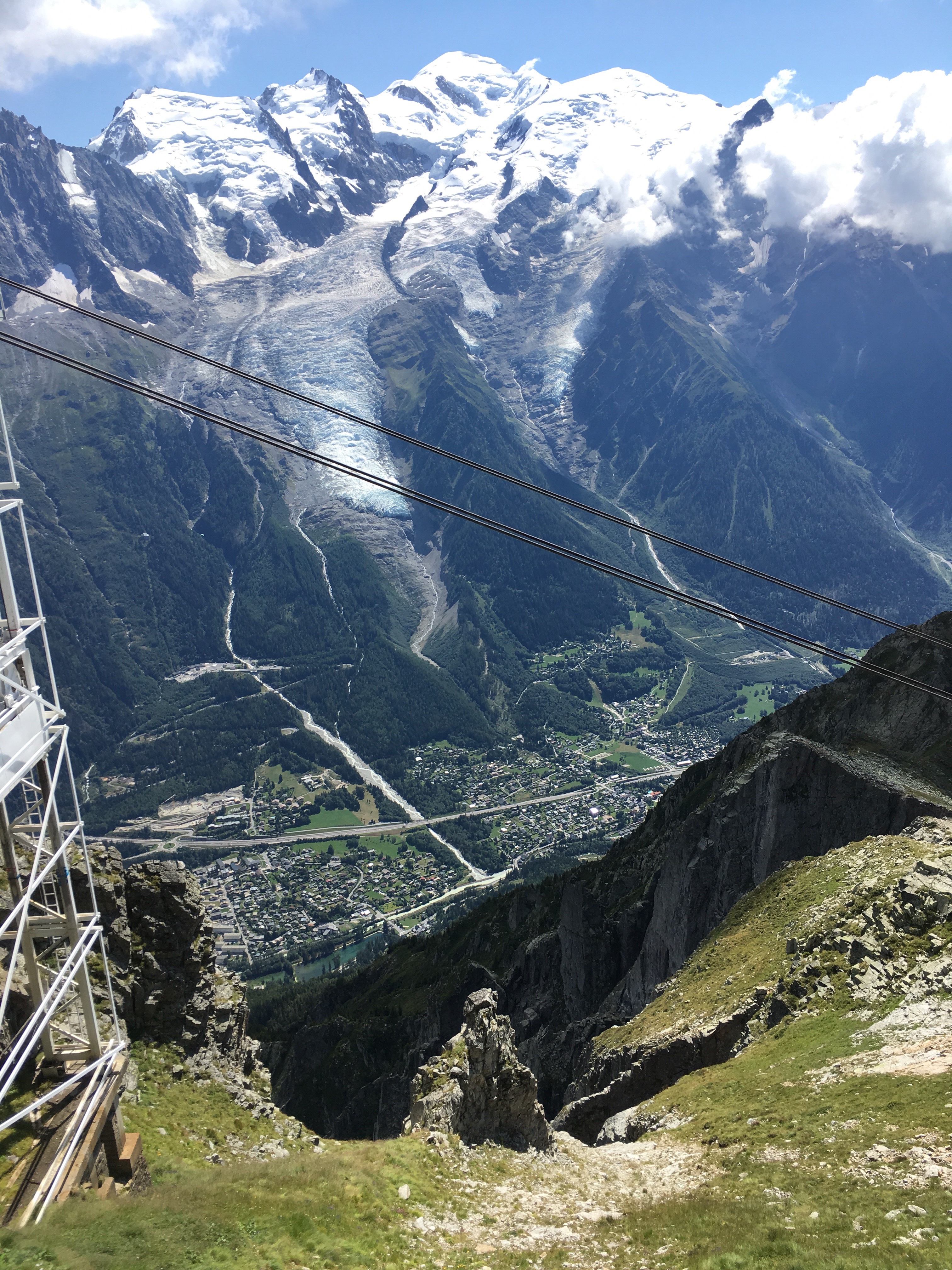