Well, sadly the knee wasn’t much better by the time we awoke this morning. After breakfast I walked up the road & back down again via a fairly steep & uneven path, at which point the pain came straight back. Ups, flats & even downs seem fine, but anything down & uneven that needed knee muscles to stabilise were a no go.

It’s many years since I was weak at the knees. Obviously the last time was when I met Polly… #browniepoints

So we decided to walk the half hour to the next village, Argentière, where we were sure we’d find a pharmacy to buy some more muscle cream & hopefully a knee support.

As tonight’s refuge is at height & consequently remote, our bags wouldn’t travel ahead for us. We’d booked transport for our bags to arrive at last night’s refuge & for them to go on to Chamonix for tomorrow night, but we needed to pack everything needed for tonight & tomorrow in our rucksacks. This was interesting, because although the room we stayed in last night was for 2 people, I think it was intended for 2 far smaller people!

So we spent an interesting half hour or so dancing around each other, with the odd hip-hold-and-move, until everything had been packed.

The room had a shower room too, with a loo, but sadly the (sliding) door only closed two thirds of the way. So there were a few other interesting moments too (3 in total), although strictly NO hip-holding for those! Just timely coughing, exaggerated & loud movements around the room & a few squirts of deodorant afterwards as the aroma joined the room… the other consequence of the door not closing!

We set off to glorious blue skies & beautifully warm sunshine, trying not to get ourselves run over as we walked the windy road down to Argentière. There we found a pharmacy & left a little while later €68 (!!!) lighter but armed with ice gel & a knee support.

The roads here aren’t really designed for walking along, & having dropped well below the TMB trail to visit Argentière decided the safest thing to do was grab a bus to La Flégère & pick up our route from there. Sadly, with my knee injury & the time lost trying to sort it, we were unable to do any of the ladder work we did last trip, meaning we also missed out on capturing the views we’d wanted to capture that we’d missed before. But we figured falling off the ladders probably wasn’t worth any amount of beautiful scenery!

On arrival at La Flégère we made some calls home. I called Polly for some sympathy, but sadly I’d just missed it. I think it left about 23 years ago, around the time that Jake was born. I received some very sensible advice on pain relief though, so am currently dosed up & relatively pain free. So thank you darling x

Next we queued for the cable-car up to Refuge La Flégère – for two & a half hours! – with (very full) rucksacks getting heavier by the minute & young children around us getting more impatient by the minute too. But eventually we got to the front & up we went to 1875m… effortlessly! It did feel really cheaty doing it this way, but I did keep waving my knee around so that everyone knew I wasn’t well.

Obviously by this point we were absolutely exhausted. The dangerous walk, the pharmaceutical negotiations (which included my knee being measured), the bus ride, the queuing, the emotional phone call home… so the first thing we did was buy ourselves a beer each & sit in the sun to eat our packed lunch!

Not just any beer either I tell ya – beer made from glacial water! Check this out: 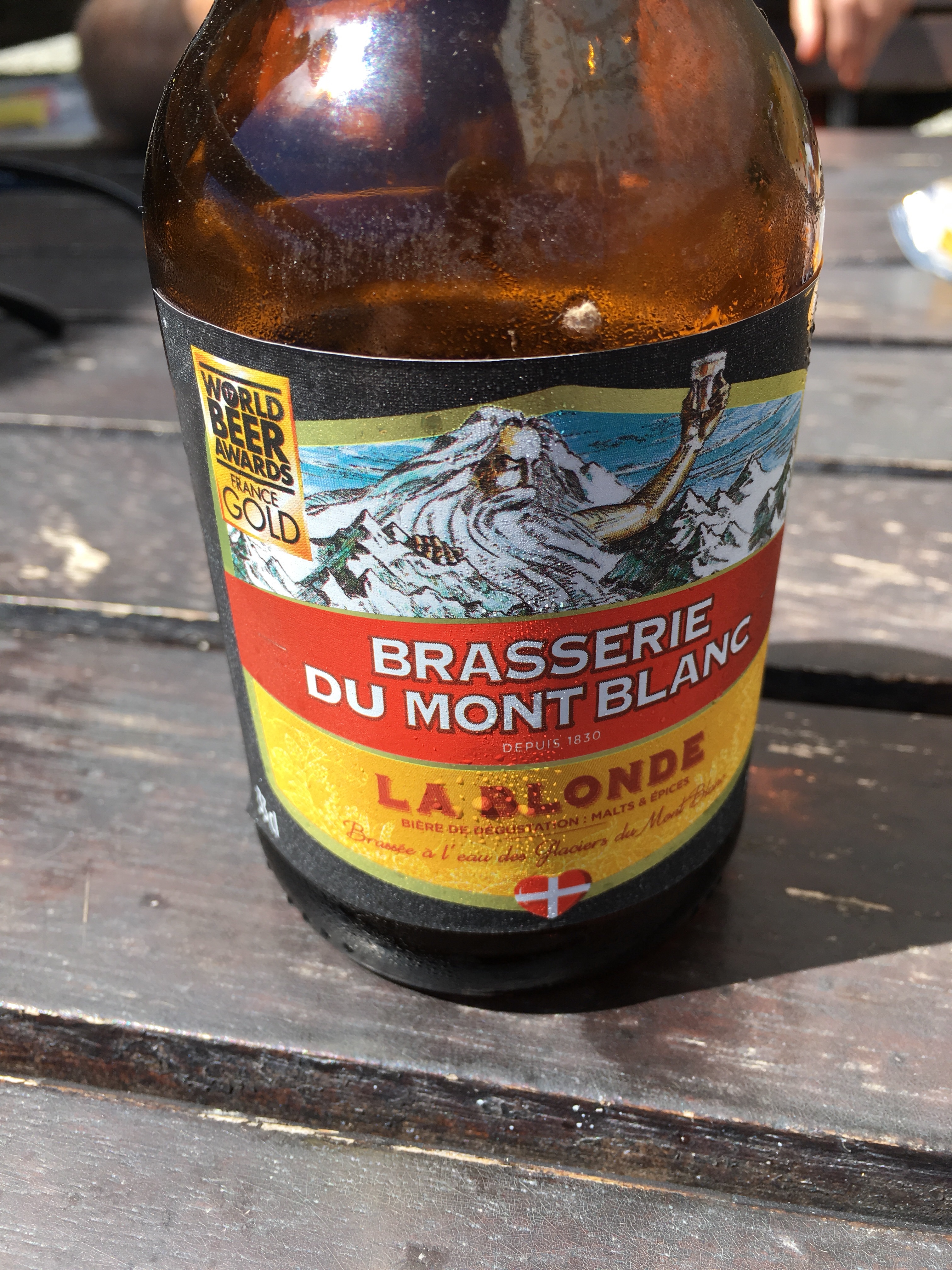 And a very nice Blonde it was too!

Our refuge for tonight is pretty basic. It’s right next to the cable car, but the cable car stops late afternoon at which point everything goes silent. Our view is directly out on to the Mont Blanc Massif & we can see the Mont Blanc peak too. The clear sky means the view is uninterrupted & very beautiful. Here’s a panoramic of what I’m looking at right now, as I type:

Tomorrow, all being well, we’re hitting the trail hard again. But instead of coming down the bone-crunching route we did last time, I think we’re going to come down via the cable car straight in to Chamonix rather than continue on foot to Les Houches. We’ll see. But it certainly seems sensible. I really don’t want to hurt myself to the point of jeopardising future adventures – what else would I do in retirement?! I’d drive Polly even more bonkers than I do already!

My knee feels SO much better now though. I’ve tried a few rough scrambles down some steep paths & it feels great. Paracetamol, ice gel & prayer have worked wonders. Can’t wait to get back out there tomorrow.

8.40pm update: Just had dinner. Was slightly quirky. The main course was potato & cheese in a small casserole dish. The vegetarian option was accompanied by a huge lettuce leaf on the side, the non-veg option was accompanied by a slice of ham & 2 other (very chewy) meat slices. Strange. Ate it all though, very hungry this evening. Just been outside to check out the view & took this. Thought you might like to see it. It’s so beautiful up here, & still. Cold though, now the sun’s gone behind us.

And here’s the bionic leg! 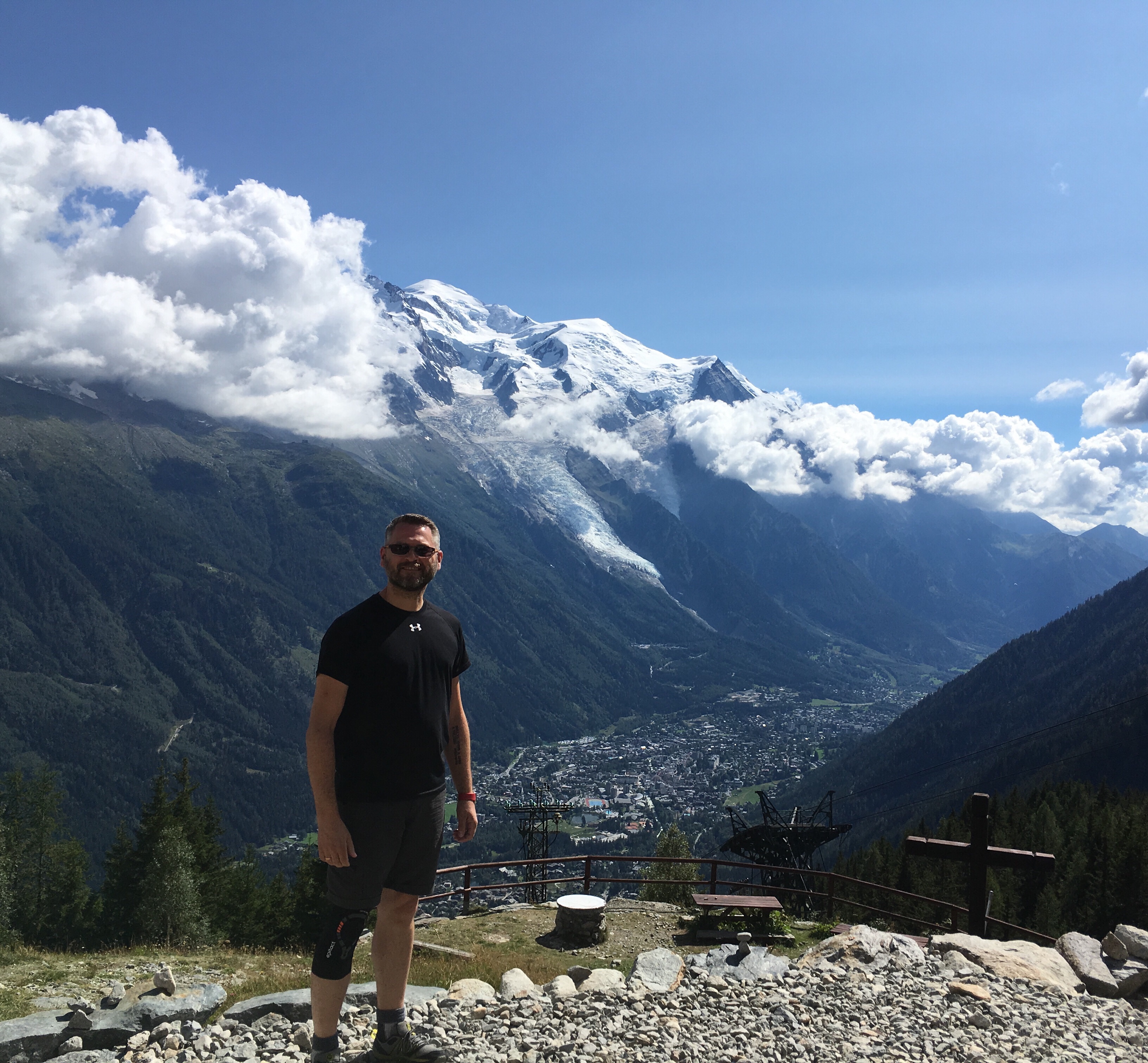