So! The first official trek day completed! Boy oh boy oh boy… that was hard. “Just 646m” he says… “Just 16km” he says… however, what I hadn’t expected was such a blistering hot day coupled with the up bits being such nasty pieces of work!

Within about half an hour of starting we were both desperately trying to find enough oxygen to fill our lungs – the ‘ups’ were SO shear. I could hear my heartbeat so loud inside my head I was amazed nobody else could hear it. We walked/climbed pretty much non-stop for an hour & a half, before having a break. Then plodded on to the highest point for the day at Col de Voza. We made good time at 1.75 hours but were sorely tempted by the Mont Blanc tram… just beckoning us on to it… but we withheld.

From here it was down – with a few really nasty pig faced ups – but we stopped just short of Le Champel for our lunch. Last night’s hotel had provided us with a gold plated diamond encrusted packed lunch – at least that was what we were expecting for €12 a pop. However, we felt a bit disappointed by the boot sole ham included in the sandwich, the baby food puréed apple pudding & the Mars bar that had by this point – obviously – reduced itself to a substance which, by consistency, was altogether very unappetising. However, we were SO hungry by this point it didn’t seem to matter that much. Apart from the Mars bar. Mike’s still been unable to eat his!

After lunch we carried on in to Le Champel but managed to get a little lost. We made the mistake of turning right at the donkey. We should have known, because there was no mention of a donkey on the map. In fact there was no mention either of the lama we found paddling in the stream, but that didn’t stop us taking some rough co-ordinates from him too…! (& not a sight you see every day!)

Anyway, after walking for some way, we came to a sign advising us that the place we were walking to was actually in the opposite direction, back the way we had come. This time, we turned left at the donkey which turned out to be right… except it was left, but you get the drift right? I mean left…

Anyway, we were back on track. Make mental note, write to map people & tell them the donkey should be on the map. Important stage.

Continuing to descend, we arrived [eventually] at our final destination of Les Contamines at a height of 1167m. We did get a bit lost again, although no donkeys were involved this time. Except me that is, as I’d taken over the map reading at this point! But, we did eventually make it & headed straight to a street bar for a beer! I can officially say that I had the best beer I’ve every tasted. In the world. Ever. Boy did it taste good!

Mike opted for a cider. Which oddly arrived in a tea cup… work that out. Anyway, he was very pleased & followed it with a marvellous beer also!

The hotel was easy to find – the last hotel now until the end – & I tried my best French. Which actually went down very well, even if I say so myself! Mike & I had already decided that any attempts at French would be done by me as all his attempts had – unfairly I feel – been greeted with complete blank faces. He’s tried a few times & each time – unfairly I know, & I’m not proud of it – I’ve almost wet myself with laughter at the faces of those he’s spoken to. A mixture of pain & confusion. But very entertaining… ????

But at least we’re having a go, right?!

So after such a hard day there was only one thing to do really – collapse in the room & fall asleep. Which we did!

A first today is that I have introduced Mike to ‘beard balm’. I’m not convinced he entirely ‘gets it’, nor grasped the name as he is currently calling it ‘beard relish’, but it’s a work in progress & I’m convinced he’ll be a convert by the end of this adventure. It is, after all, the future. And it helps you glide through the air, thus helping trek speed.

Dinner was fab. I had the pleasure of a beautiful King Charles Spaniel pup at the table next to me, so – obviously missing Betty & Bumpy massively – there was lots of ear stroking going on. But I told Mike to stop as it might be seen as in appropriate…

So off to bed now, with a full tum, aching shoulders, painful legs, a spot of indigestion, but a perfectly streamlined beard.

Tomorrow is going to be a real PIG of a day though & I’m quite dreading it. I’m hoping that my body will just ‘man up’ to the job in hand, but the heat, the backpack weight, the unforgiving upward climbs, were all really hard today – & I’ve not been well you know!

Tomorrow we pick up the trail where we broke off from it today &, check this out, have a total ascent of 1316m (double today’s), a total descent of 929m (& with a heavy backpack the decent is a killer too!), over a distance of 18km! The walking/climbing time alone will be around 7.5 hours… & if the heat is like today… I’m VERY nervous.

On the plus side, this scenery is like nothing I’ve ever seen. The scale of these mountains is breathtaking. And to be walking beneath snow topped mountains, with sheer faces just covered in trees, is amazing. Whole cloud formations just sit, perfectly still, trapped between the peaks. The views down the valleys are misted by the part of the cloud formations that can’t escape. And the air is so still – hardly any birdsong at all. It’s just exhilarating. My photos do no credit to the scale at all, although I posted a panoramic one on Facebook earlier & it converted it to one of those 180 degree type pictures where you can move around & see what I see. It’s very cool.

So, off to bed then, to try & mend a bit in time for tomorrow. An early off hopefully – about 8.30am. Try to break the back of it before the day gets really hot!

Please leave comments. It’d be lovely to hear from you & I won’t feel so far away.

Will upload some more pics tomorrow, but my gadget isn’t working for some reason at the mo & I need my bed! Night all x 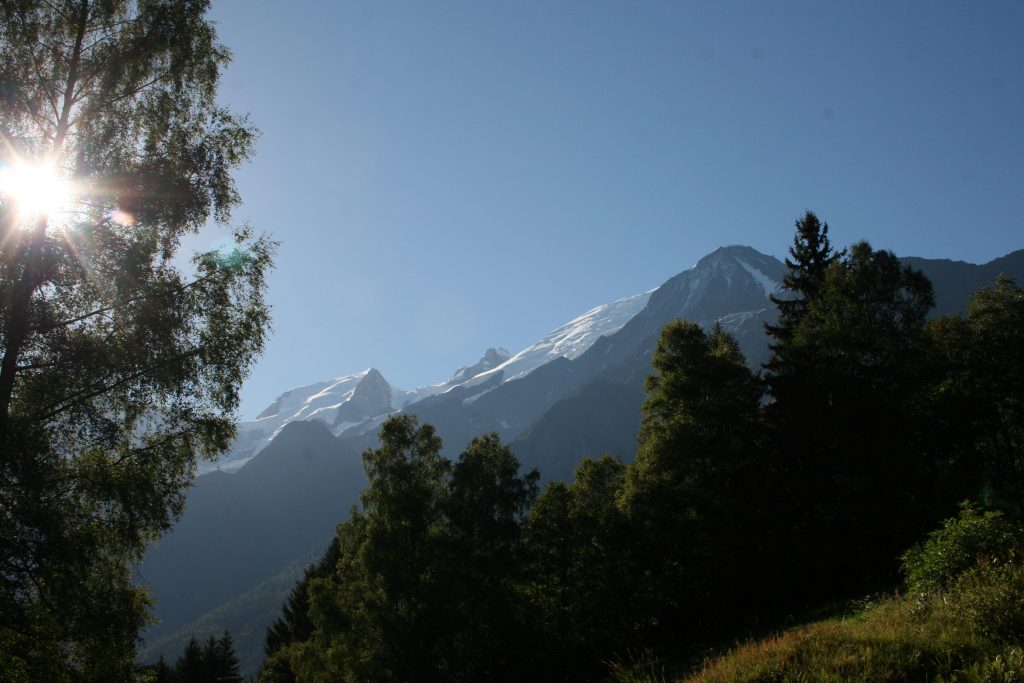