Thanks you to everyone who has added comments to the blog – it was a lovely surprise to open my iPad up & see so many. Keep them coming!

It’s fair to say, we had a cracking night’s sleep. Once those ear plugs had gone in & the eye covers had gone on, we were out for the count. Mike didn’t even hear me snoring & even Polly heard that in Bushby! That’s how pooped we were!

I was awake before the alarm & the whole room was still asleep, so I took the opportunity to go & shower & abloot. By the time I went back to the dorm daylight had started to appear outside… to reveal torrential rain. My heart sank. Even when we came last time we didn’t start in the rain. This did not bode well.

Mike was awake so we had a quick grumble then got ourselves together & went for breakfast. Without a map, the breakfast was quite difficult to navigate. It was basically a free-for-all, everywhere, with no particular order, & if you turned your back for even a moment your toast got lifted from the (stupidly slow) toaster!

There wasn’t much room in there either, so everyone ended up doing a bit of a relay & took stuff back to the table in stages, then went back for more. Clearly some of those having breakfast had opted for the non-washing-of-self option following their previous day’s exertions, so sadly quite a lot of the food I chose didn’t taste quite like I’d imagined it would.

One guy was dressed like he was heading out to the North Pole – with the warm & humid temperature outside I can only imagine what dinner time will be like sat next to him later! Hopefully we won’t find out!

We headed back to the dorm & completely repacked our day packs based on the weather. Slightly awkward as we listened to a Canadian guy retelling the tale of when he zipped the end of his Johnson in his flies. The young, blond girl seemed very interested… but maybe she was just being polite.

The rain was still hurling itself down outside, so we had another grumble, toyed with the idea of coming home, listened to the Canadian plonker bleat on for a bit longer, then suddenly felt better about ourselves so headed out!

The temperature outside was quite warm, but really humid, even though it was chucking it down. So it made clothing choice difficult. We opted for shorts & t-shirts, but with a waterproof jacket over the top it wasn’t long before we were dripping with sweat underneath. Fortunately the rain started to subside after a while so we de-layered which was much better.

The sky started to clear & it began to look like we might be alright after all… but alas, it was not to be. Although the torrential rain of earlier didn’t repeat itself, the temperature, wind, & light drizzle came & went for most of the day.

By around 11.30am we’d made it up the 1100m climb to Col de Balme, where we’d intended to have a hearty bouillon (not soup) as we’d enjoyed last time, but imagine our disappointment when we found that not was the dear old bat not there any more, but that they no longer did bouillon! Gutted. Especially as I’d been hoping to rid myself of the taste of the cheese & onion infused chocolate chip cookie I’d eaten about 30 mins earlier.

That’s what happens when you put a choc chip cookie in the same lunch box as a cheese & onion roll from Subway, bought the day before, & left in your rucksack overnight ready for the next day’s snack.

Still, the chocolate cake, the fruit cake & the 2 cups of coffee we had instead of bouillon were very nice. Except I did feel a bit sick. I had actually eaten the cheese & onion roll just after the choc chip cookie earlier too.

From Col de Balme we dropped 200m to Col des Posettes before climbing the 200m up to L’Aiguillette des Posettes. All the time, sadly, the clouds were coming in giving us very little to see of the snowy Mont Blanc dome. Gutted really, especially as this was one of the reasons we came back – but that’s mountain weather I guess.

Everything certainly looked different to the last time we climbed here – to the point that Mike & I had the odd map tussle, so convinced were we that we were going in the wrong direction! Mind you… I can understand why, based on current form!

Our 800m descent from L’Aguillette des Posettes was more gruelling than either of us remember. Maybe because we’d gone straight in to a hard hitting 9.5 hour climb covering roughly 13km rather than the ‘gradual’ introduction of last time. But also the ground was wet underfoot, the trees roots (of which there were many & very dense) were consequently very slippy, the jolts ‘down’ became harder & harder to counter, & after a while they took their toll. 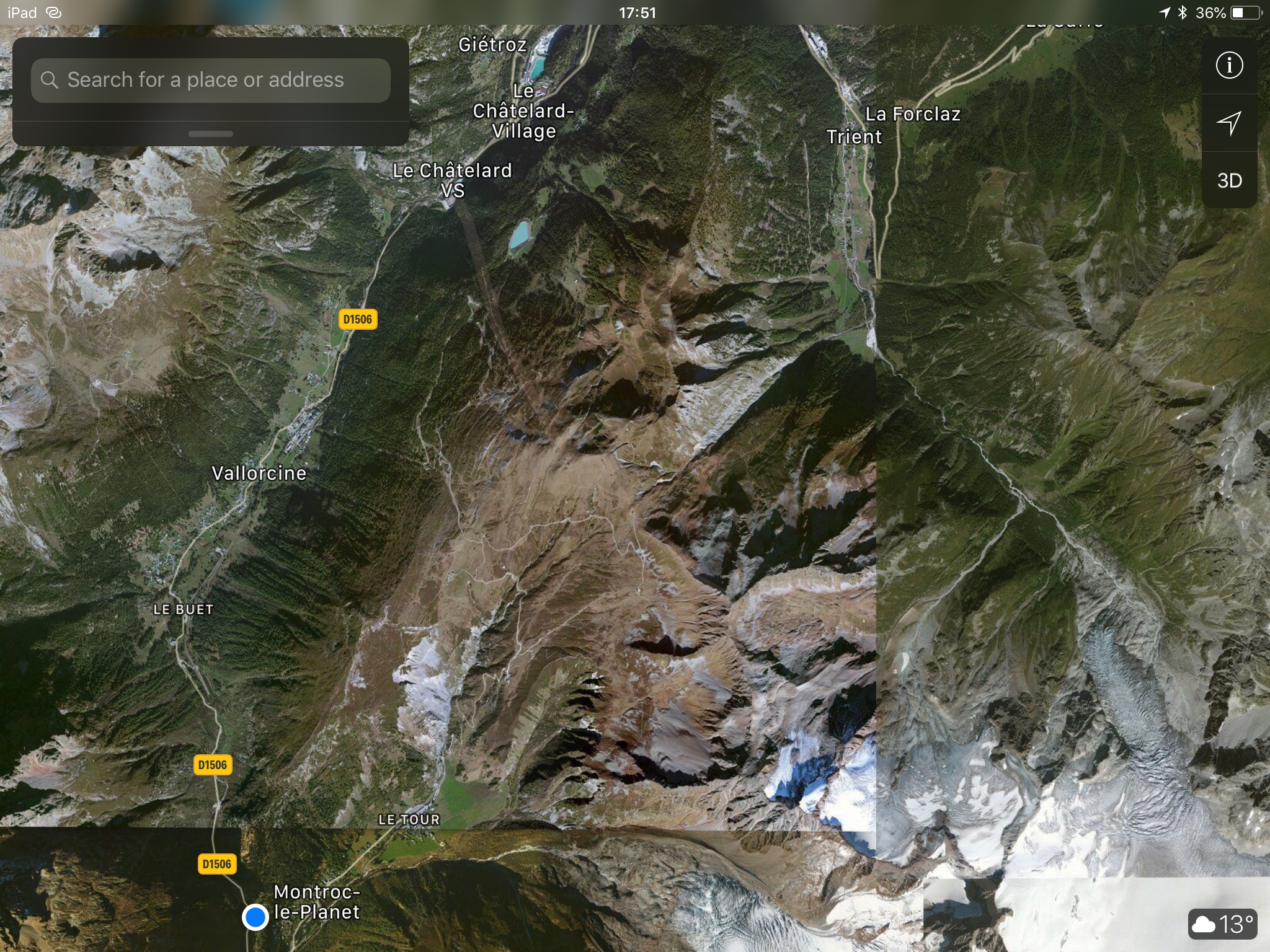 Trient is top right, then we basically navigated diagonally around the Mont Blanc Massif down to the blue dot bottom left.

So I’m sorry to say, I’m injured. I officially have a damaged knee & can barely walk on my right leg. No, really! We’re going to see how it is in the morning, but it may be too bad to carry on climbing. I’ve rubbed a load of stuff on it – kindly donated by one of our fellow roomies – but it bloody hurts.

We emptied Mike’s rucksack to see if I could fit in it so he could carry me tomorrow, but sadly it’s just a little too small. So prayers please (again!) for my knee.

This is what we’re looking at doing tomorrow, so you can see my concern: 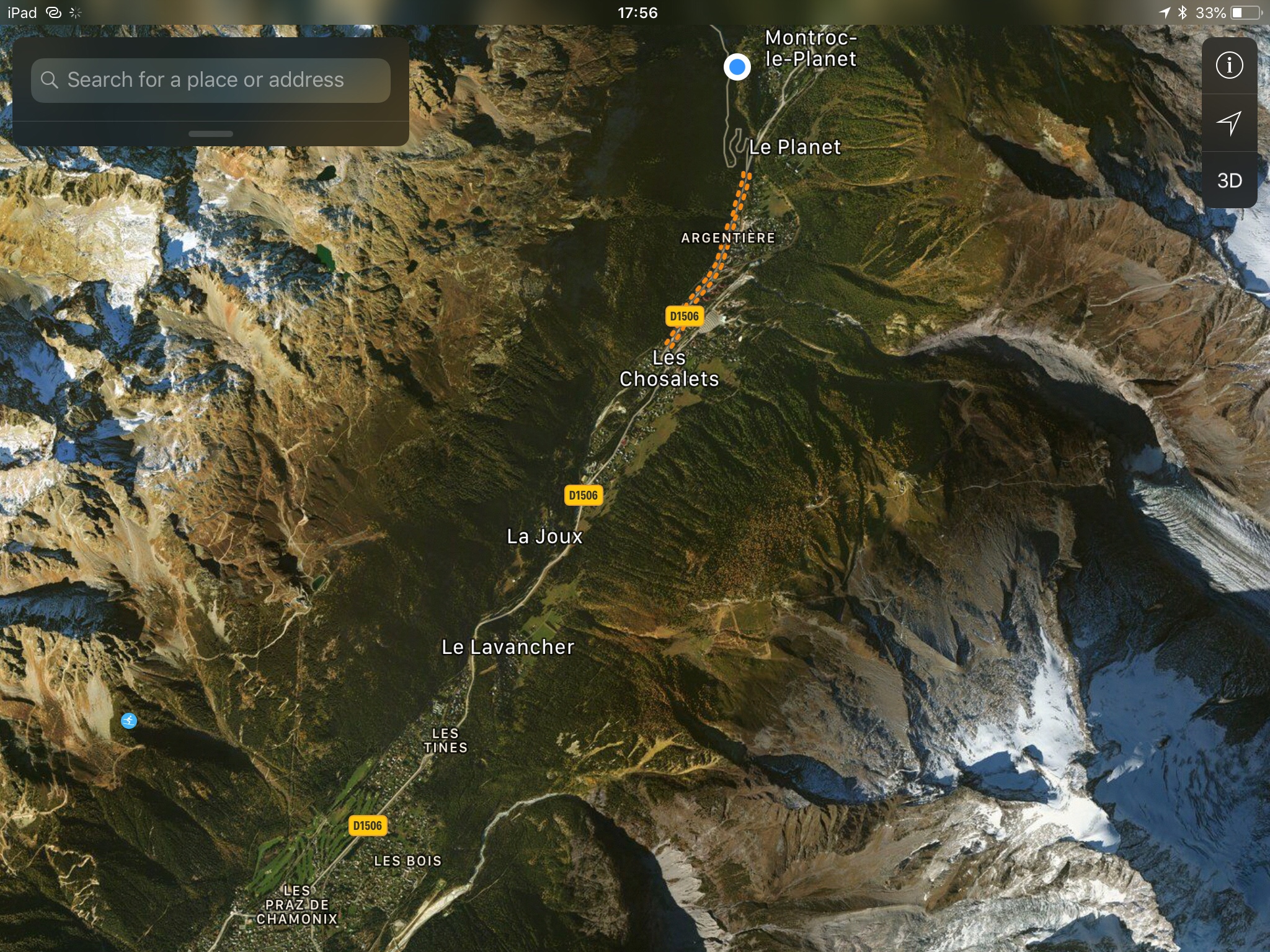 From the blue spot at the top, to the small green area bottom left. Although we could do it by road, by bus, we’d much prefer the ‘over mountain’ route. Will keep you posted.

Apart from the injury though, great to be back doing what I love. Heart pumping, chest bursting, legs burning, the feeling of leaving the world behind… & all the while surrounded by mountains bigger than you can fathom. Love it. 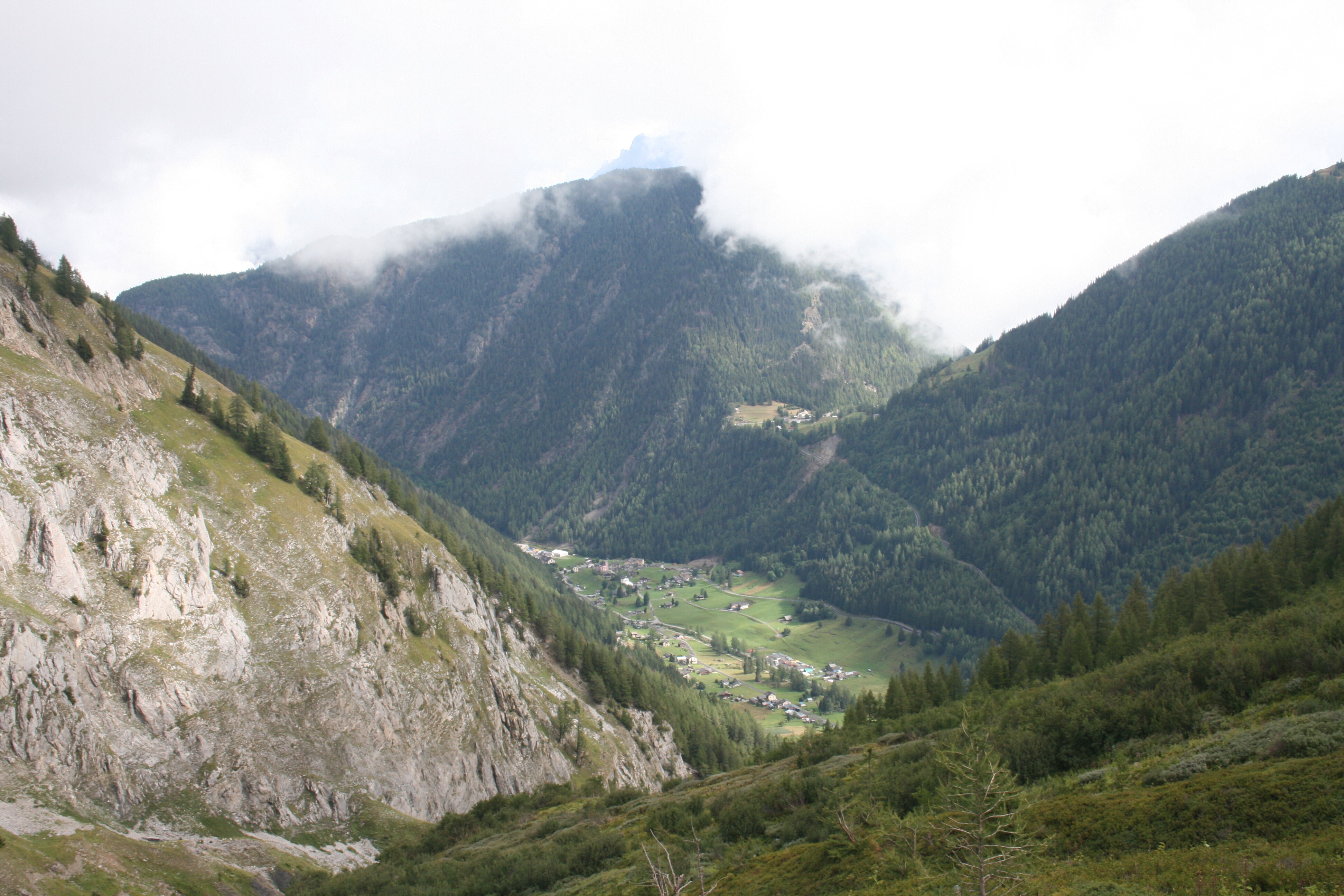 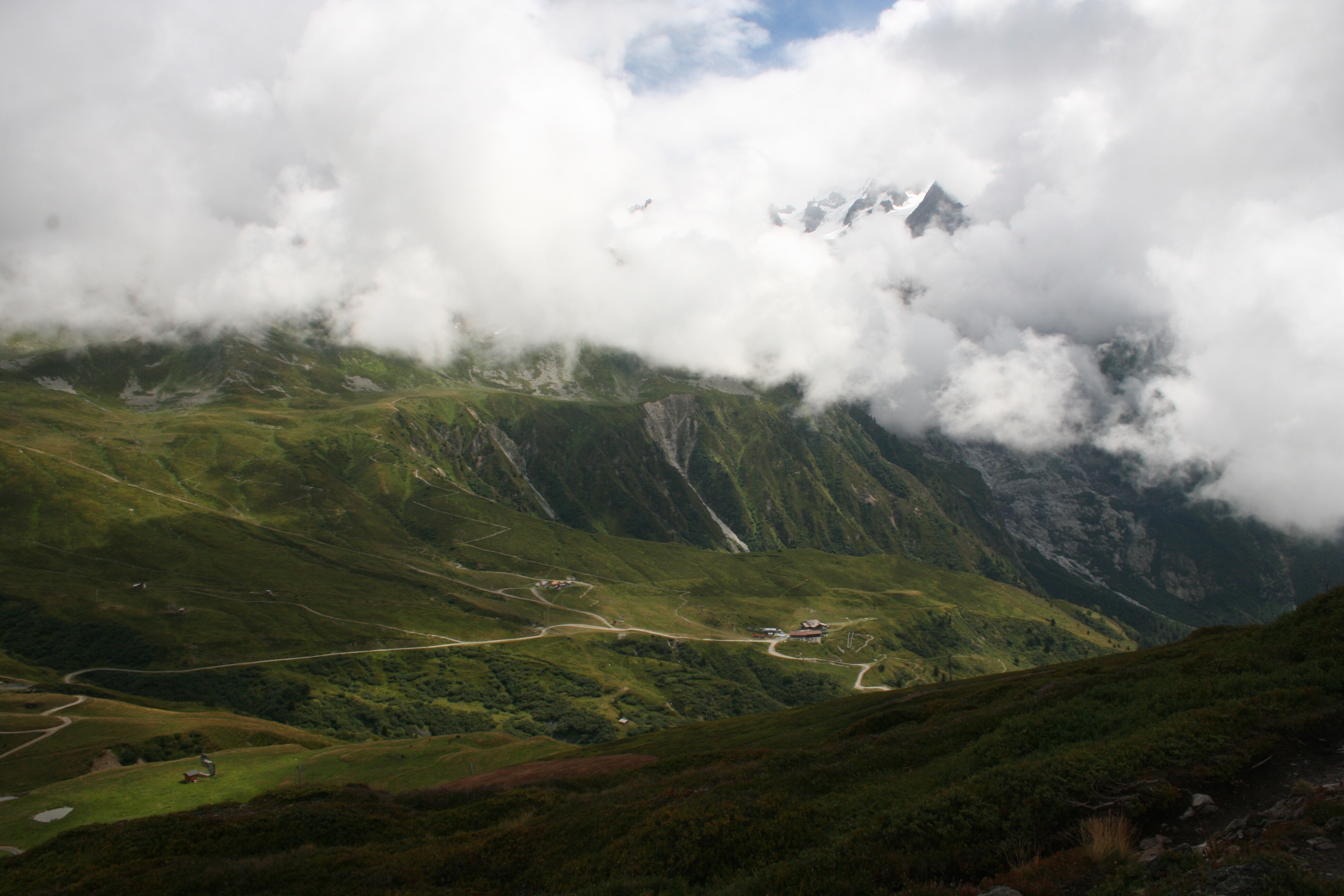 A typical path (the zig-zag): 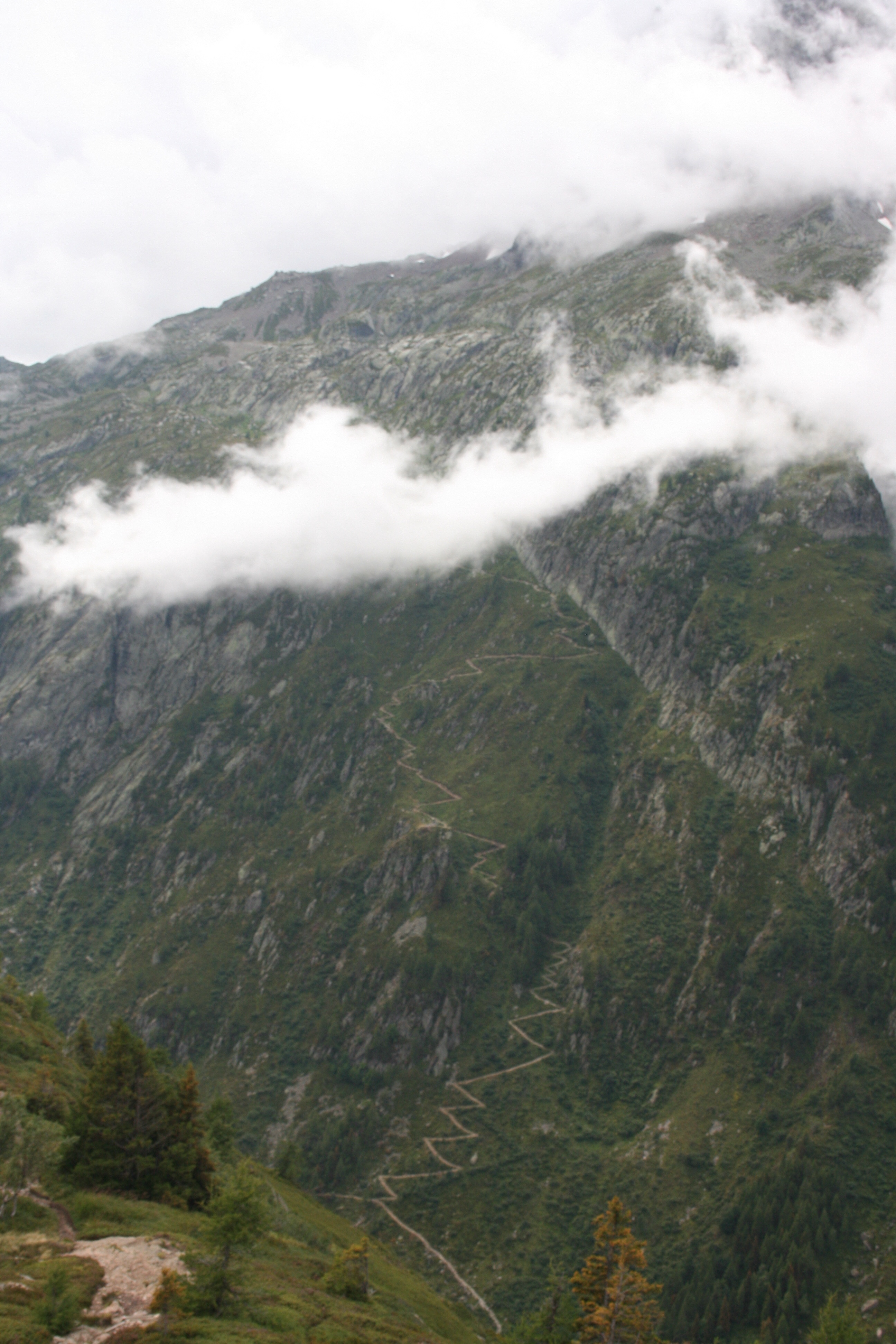