“Morrrrning Tea!” oh, that cry outside the tent took me back 🙂

It wasn’t quite the same though – what with Mike grinning at me from ‘the other side’ of the ‘tent’ & not Rob, coupled with the fact it was actually coffee. But the thought was there. It was certainly flaming cold enough! Corrr!

Dressed super quick & in to the food tent for breakfast… porridge to start (I put a hefty dollop of honey – yes, honey! – in mine), followed by pizza! How on earth do you cook fresh pizza up here?! Beautiful crispy base, with fresh tomato, olives & melted cheese. Man, will Marco ever cease to amaze us?! Finished off, as ever with a nice hot coffee 🙂

6:00am, vamonos (Spanish for ‘let’s go!’). A brief walk to the second checkpoint of the trek. While we were waiting, we had a ‘weigh in’ to see which of us was carrying the heaviest backpack as there were some random scales at the side of the waiting area. First prize went to Anna whose pack weighed in at 9.7kgs. Second prize to… yep, you guessed it, me! Weighing in at a very close 9.2kgs – only half a kilo off winning. Not sure whether that’s good or bad though… ask me later!

We were cleared for take off & bang, we were straight in to it. The plan for the day: climb, climb, climb, short rest, descend. Estimated time 7 hours. Estimated arrival time at camp 2, 2:00pm. None of us expected it to be so hard though.

Warmiwanusca, or Dead Woman’s Pass, sits at 4198m (13769ft) above sea level. This will be the highest point we pass on the trek. Again, the trail is original Inca consisting of a mixture of rough rugged stone paths, steps varying in height from a couple of inches to knee height, loose dirt, unstable rocks & wet rock where fresh water streams flow across – & until we reach Warmiwanusca it’s up, up, up & more up at inclines that hurt your neck as you look up at where you’re walking.

It was a killer. Five & a half hours of absolute purgatory. I can honestly say I have never, ever, done anything so hard in all my life – & I thought Everest Base Camp was hard! For those who know it, this climb was even harder – & longer & certainly more relentless – than even the Namche Bazaar climb! At times I thought my heart was going to burst out from my chest, at others I thought I was just going to keel over & die! Today will stay with me – & no doubt haunt me – for a long, long time. 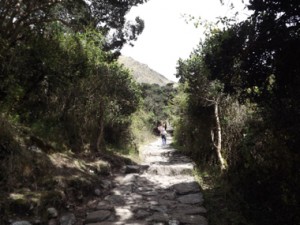 The views, of course, were spectacular. I took as many photos as I had energy for, but in the end I couldn’t even lift my feet over small stones my legs were so heavy – so I’d just walk round them! I’d rest to take a breather & take some water, my heart rate would come down, my breathing would even out & I’d feel ok to set off again – then within a step or two I’d be faced with a huge step as high as my knees & I’d have to heeeeeave myself up it & all the energy would just drain away & I’d have to stop again! 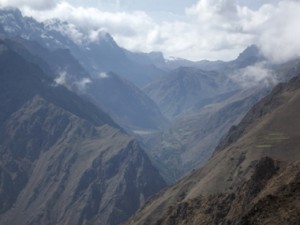 In the end, the final destination came in to view. Right up high above me was the silhouette of where the valleys met at the very top of the path I was walking along. Through the zoom lens on my camera (on max) I could make out the shapes of people moving along it – like little hairs on sticking up from an imaginary arm. So, that was the goal then – question was, how long would that take. At that point it looked impossible.

Step after painful step I plodded on. Sometimes I’d only be able to make a dozen paces before it came too much, then I’d get in to a bit of a flow & I’d manage longer. But always, it was the knee height steps that would just deflate my energy level in one fell swoop. Another hour passed & I was encouraged to look up & see that I could make out the shapes of the people on the edge above with my bare eye. I plodded on.

Another half an hour & I was within touching distance, yet with each step it remained just out of reach. By now my chest was hurting with size of breaths I was needing to take to just stay with it. I was feeling every gram of the 9.2kgs I was carrying on my back & I was wishing I could just curl up… 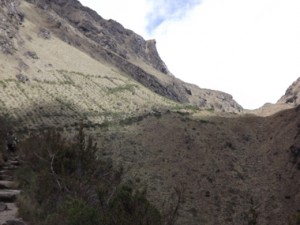 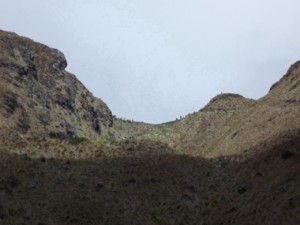 Then – I was there. 4 smiling faces greeted me – I was the fifth in. Rene got there first, Brianna second, Ruth third, Angelina fourth. Very well done to them, but I just couldn’t have done any better – I didn’t think I was going to make it in at all!

The remaining 10 came in over the next hour, so we had a good long rest time – during which I emptied my backpack of all food! 2 packets of cheese biscuits, an apple, a cereal bar & a bar of what looked like bird seed – my body was just crying out for sugar! Once everyone had come in we spent a little longer resting so that everyone could recoup a bit, then we a group photo – times 15 cameras! It took a while 🙂 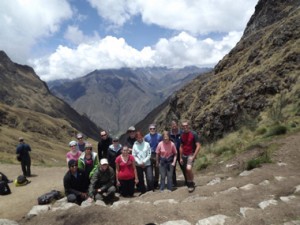 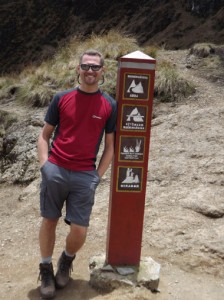 Then came the decent. Not as hard on energy, but very hard on the body. Almost vertical in some places, with steps as deep as the knee high ones a good chunk of the way, it took Rene & I (as we walked together for this last part) just under an hour to descend the 1162m (3655ft) – & boy did my knees & thighs know it! They went in to spasm & started to shake the minute we reached camp – & the worst of it was that this was just a short introduction into tomorrow’s afternoon decent (more details to follow!). They soon calmed down though – thankfully! Tonight we will camp at Paqaymayo at an altitude of 3660m (12078ft). 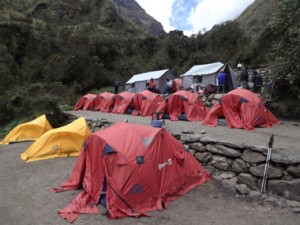 The other 13 started to come in after about another 5 minutes & over the next 45 minutes.

An afternoon spent recovering was gratefully received during which I blogged while Mike diaried. Tea was at 5:30pm – cheese puff pastry turnover & apple puff pastry turnover, plus hot chocolate. Dinner was equally delicious – soup, more spicy chicken finished off with you’ll never guess what… a proper iced sponge cake! How on earth…?! Just amazing – it was really like & scrum my too 🙂

Interesting statistic of the day from Mike: “Today we have ascended a total height of 1219m (4022ft), which is the equivalent of climbing Ben Nevis in one day – but from sea level.” I think we can pat ourselves on the back 🙂

A long day awaits us tomorrow: up at 5:00am, breakfast at 5:30am, leave camp 6:00am. Walking 16km total – with a mixture of hard uphill & rolling gradient. At the minute I just need sleep – so dogs, donkeys, cockerels & John’s snoring pending… we’ll see!