Talk about deja vu! The bus on which we travelled to Cusco was virtually identical to the one we travelled to Arequipa on a week ago – was it really only a week ago…?! The only differences were (a) no pillow, (b) no blanket, (c) narrow seats. Francis & I were still sat next to each other – I think in virtually the same seat position – the only difference this time was that I worked out which was the aisle seat & it was my seat, so I sat in it 🙂

However, Francis hasn’t been too well this past week or so, when he asked if he could have the aisle seat what could I say? I ‘settled’ in next to the window – very next to the window because room was so tight – & planned out the next 7 hours in my head to distract myself. I think the only consolation was that Mike & John were sat behind me so I could turn around every now & then & give them a bit of a ribbing 🙂

The air blowers were only blowing hot air too, so I was getting increasingly warm & increasingly claustrophobic, but I started to stick to my plan & it seemed to calm things. Part 1 of the plan was to have a little nap. So I reclined my seat into Mike’s forehead & began. 1 hour gone. Next, watch Despicable Me on my iPhone – never seen it before, popped it on there ‘just in case of emergency’ before leaving the UK. Now was such an emergency. Thoroughly enjoyed it, another hour & a half gone. Next, have a trip to the loo, a stretch, & eat one of my bananas bought earlier at the bus station – taking care to avoid any bins… another 10 minutes gone. I was up to nearly 3 hours & the plan was going great… then it all went pear shaped. The bus had a puncture. 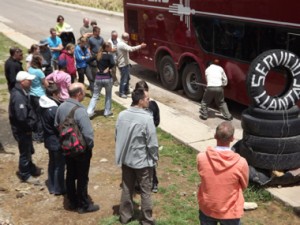 It took over an hour to change the wheel – mainly because the jack collapsed under the weight of the bus for some reason. I’m no expert on these things, but should all the passengers be off the bus when it’s being jacked up? Anyway, a few blocks of wood seemed to do the trick (!) & the wheel was changed successfully – ably helped by about 50% of the people on the bus getting off & encircling the driver as he worked. The British amongst them were obviously telling him how he should be doing it… see if you can spot any familiar faces in the crowd 🙂

It gave me a chance to get a few nice shots though – the snow covered Andes at our side & the vast flat grassy plains that surrounded us. 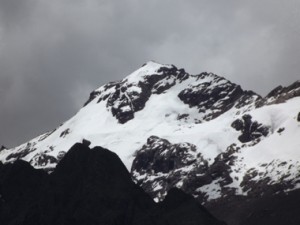 Anyway, off we went again. My plan was somewhat shaken at this point. However, I persevered. Next, finish yesterday’s blog – that saw off an hour & three quarters, after which I was a bit peckish & in need of a trip to the little boys room. So I nipped below (the upstairs loo was broken – probably still flooded from a week ago!) then returned to my seat – stopping to take a quick snap of John asleep & crack a joke with Mike – to munch another banana. All told, another 2 hours gone. 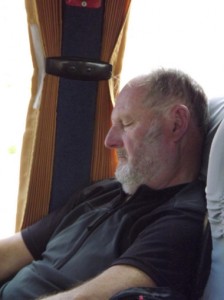 I was up to five hours, but by now was totally thrown by the puncture so wasn’t really sure how much more time I needed to kill – plus I was getting really irritated by the cramped seat & the overbearing temperature inside the bus. I thought I’d have another go at a nap. Success, but only for half an hour or so. However, when I opened my eyes I was struck by how much the landscape outside had changed.

Gone were the sharp jagged angles of volcanic mountains & canyons, gone were the vast sweeping plains of yellow grass, replaced instead by beautiful, richly coloured & smooth textured hills & valleys. The look reminded me of the papier mâché hills I used to make with my dad when I was younger, to go around the track of my electric train set. They were so distinctly different from any of the scenery we had seen so far.

I found that the next hour & a half went by without me really noticing, I was so fascinated by what I was seeing out of the window. As we neared Cusco we saw more & more evidence that this land had once been dominated by the Inca people – city gateways, old ruins, kilometre after kilometre of Inca trails… I found myself itching to get at the Inca trail we would be taking to Machu Picchu 🙂

We entered the outskirts of Cusco & I have to say, I was far from impressed. It looked a right dump! What I hadn’t realised was just how vast Cusco is & that what I was seeing was the very outer edge of Cusco. As we travelled further towards the centre, so the landscape of the town changed. By the time we had reached the centre, my opinion had completely changed – it is absolutely beautiful. My words won’t be enough to describe just how beautiful it is, but we have a free day tomorrow to ‘explore’, so I’ll upload some photos then & you can see for yourself.

Cusco’s population sits at around 510,000. It was the Inca’s monumental city & was colonised by the Spanish in 1533, whereupon the Spanish set about wiping as much evidence of the Inca’s existence as they could from Cusco. However, as the years have passed, more & more evidence of the Inca’s existence has surfaced – probably the most amazing of which was the discovery of the lost city of Machu Picchu in 1911. The abundance of Inca historical evidence, coupled with the beauty of Cusco itself, mean that tourism is the main business of the city. 80% of the businesses here are tourism related. 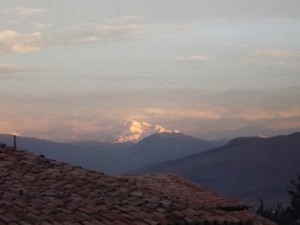 Our late arrival in Cusco meant that we had missed lunch, so we headed straight in to town for a very late lunch/a very early dinner after we had dumped our bags in our rooms. Our 6pm Machu Picchu briefing was postponed until we had eaten, so we had that at 6:40pm. I’ll share that with you before we depart on Thursday – it’s too gruelling to even think about at the moment!

All the youngsters have headed in to town for their last night of alcohol until after the trek. I stopped drinking alcohol way back in Arequipa on day 6 – high altitude & alcohol aren’t a good combination, & whilst I’d love a large full bodied Chilean – I’m talking red wine of course! – it can wait until I get a bit nearer to sea level!

OK, signing off time again. 10:20pm here, but no early start tomorrow. Mike, John & I are going to head into Cusco about 9:30am & then pop back after lunch for some FaceTime with Polly & Brenda hopefully (if Polly gets my email!). Look out for the photos tomorrow!