Body clocks woke us around 7:00am. John said the donkey braying had kept him awake a lot of the night. I actually thought it was John that had been making the noise! Maybe he was just covering his tracks…

After ablutions, we went through to the kitchen for breakfast. Jenny, the eldest, had already had her breakfast & was ready to leave for college. She looked very smart in her green blazer & school skirt – quite out of place actually when we looked at our surroundings. College age is 12+, prior to that the children attend the school – where we had played the football match & danced the day before.

We sat down to breakfast which consisted of home made ‘bread’ – although it wasn’t actually bread like we’re used to, it was sweeter & more like leavened bread in consistency. We also had a hard boiled egg & hot water to mix with tea or coffee. After breakfast I had a walk around the family’s plot & got a better idea of the layout. Although small, they were totally self sufficient. They had a donkey for transport, cows for milk, chickens for eggs, pigs – I guess for manure as from what I could gather the people there only eat meat on very special occasions, plenty of land growing all kinds of vegetables, fresh water from the lake, electricity from the main land… it was an amazing lifestyle to witness – so simple, yet so happy. 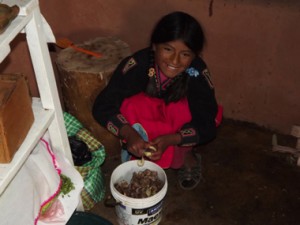 After photos, it was time to make our way down to the port to board our boat to the floating islands of the Uros people. We hugged our families goodbye & thanked them all for their hospitality, then it was wagons roll for the hour and a half journey. 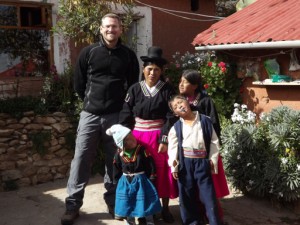 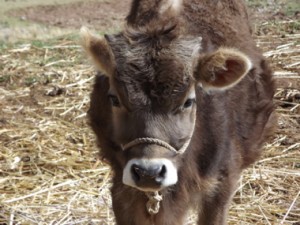 The Uros Islands date back around 2600 years. They were a result of the clash between the North & South, with the people in the middle having nowhere to flee to – so they took to the Lake & made their homes on the dense reeds. So self contained did they become, that they were able to live off the fish & water from the Lake, as well as the reeds themselves for food. They made boats & houses from the reeds too.

In reality, the majority of those ‘living’ on the Uros island are Quechuas (natives to the area) who in fact live at the Lake’s edge, as they have for several decades, living off tourism. There are some 50 islands in the Uros open to tourism; families sell handicrafts & souvenirs, & offer opportunities to go out in decorative boats made of reeds & even spend the night in rustic lodges.

There are some, however, who genuinely live on the islands & choose a life of seclusion, away from the modern world – closed even to the lure of the tourist market. These people live ‘off the beaten track’ & are apart from the more touristy area of the Uros. 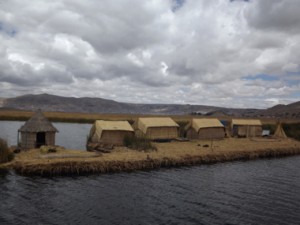 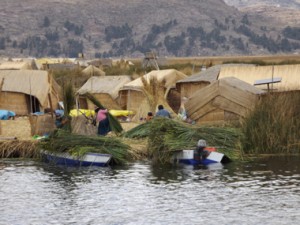 The language of the islands across the Lake is ‘Aymara’. We were welcomed very enthusiastically as we moored alongside ‘our’ island – & to the greeting of ‘Camisaraki’ (how are you?), we replied ‘Waliqui’ (fine thank you). Big beaming faces, enthusiastic hand shakes & a very warm welcome. The ‘ground’ underfoot was really squishy – not wet squishy, dry squishy – it felt like if you lay down it would be really comfortable! A small area had been cleared for us to sit & receive a ‘demonstration’ on how the islands are constructed, as well as learn a little about the culture of the people. 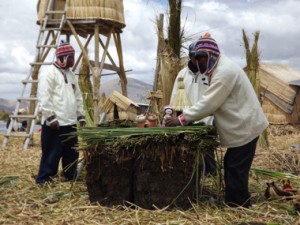 It was a very interesting visit & was rounded off with a trip around the island on a hand made reed boat, under the power of oars pulled by just two men. I don’t think I’d have lasted 2 minutes – I get tired on beach pedaloes! 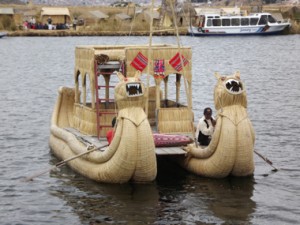 We returned to our boat for a lunch of bread, salad, cheese & ham – watching incredulously as four of the party decided to have a dip in the Lake… They weren’t in for long though as the temperature of the Lake took their breaths the minute they made contact & they were very quick to get out! Even so, I was very impressed – I guess the fact that the Lake’s water is fed from the melted ice of the Andes gives an idea of what sort of temperature to expect…!

After all the excitement, we returned to Puno & to our hostel. Showers & changes of clothing later we met in reception ready for our next excursion – a visit to the ‘Chullpas De Sillustani’.

Chullpas are Pre-Inca funeral towers left behind by the Colla people, used to bury their elite in tall cylindrical tombs. Inca stonemasonry is spectacular in itself, but these Chullpas are examples of perfect engineering. Sadly many of them have been damaged by erosion, lightening strikes & vandalism, but the Peruvian government is funding resoration works & as we walked round there were many men with hard hats working in the area. We weren’t exactly sure what they were going to achieve the the neater selection of tools that they had – which were basically made up of a selection of rusty blunt woodsaws, several plastics buckets & the odd hammer. But they all looked very busy. The picture below shows the very complicated scaffolding being used – I think this was what the wood saws were for… 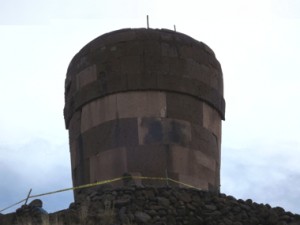 Joking aside, it was very very interesting. I was quite peckish at the end of it so bought myself a banana from one of the ladies there. Having spent a moment or two meticulously peeling it over the bin, I then dropped it in the bin itself. Great. I was too mardy to even contemplate buying another one – anyway, the lady I’d bought it off watched me drop it & I’m sure she was laughing at me. Although it was difficult to tell really as she only had 3 teeth. I skilled back to the coach & we returned to base.

Some free time ensued & I took myself off in to town to buy a few things I’d spotted last time we were Puno. Successfully haggled a few Solas off the price 🙂 & happily ambles my way back to the hostel.

The evening meal held a special treat for us – we were all to try guinea pig! Guinea pigs – or cuy/cuye/curi as the are known to the Peruvians – were originally domesticated for their meat in the Andes. Traditionally, the animal was usually reserved for ceremonial meals by indigenous people in the Andean highlands, but since the early 1960s it has become more socially acceptable for consumption by all people. It continues to be a major part of the diet in Peru.

Because guinea pigs require much less room than livestock – & reproduce extremely quickly – they are a more profitable source of food& income than many traditional stock animals, such as pigs & cows; they can also be raised in an urban environment. Generally though, they are sold as supplementary income alongside traditional livestock at markets.

Guinea pig meat is high in protein & low in both fat & cholesterol.

You just want to know what is tastes like right? Lol. It arrived spread-eagled on the plate – just like the one we’d seen in the restaurant a little while back (how many days back was that…? It seems so long ago…) – I’m sure it was staring right at me, bearing its little front teeth at me too. We passed it round & had a good old look – & of course took photos! Then it went off to the kitchen to be cut up in to chunks to hand out. Back it came – bones, head & all – it’s all edible, even the bones! 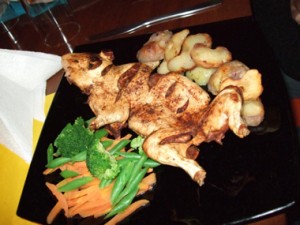 So how did it taste – well, I can tell you, it’s not that bad! A bit chickeny… a bit rabbity… pretty tasty actually. However, I just couldn’t get my head around it, so couldn’t manage more than a few mouthfuls – but at least I had a go right? Most of the group had a go, but no-one was brave enough to fo the whole way & eat the bones!

I enjoyed my ‘fillet mignon’ far better. You can’t beat a bit of Bully 🙂

Back to base, bags all repacked, early start tomorrow as we head to Cuzco on a 7+ hour bus journey. Cuzco will be our ‘base’ for the Inca Trail trek to Macchu Pichu – we leave on Thursday (14th). Can’t wait!